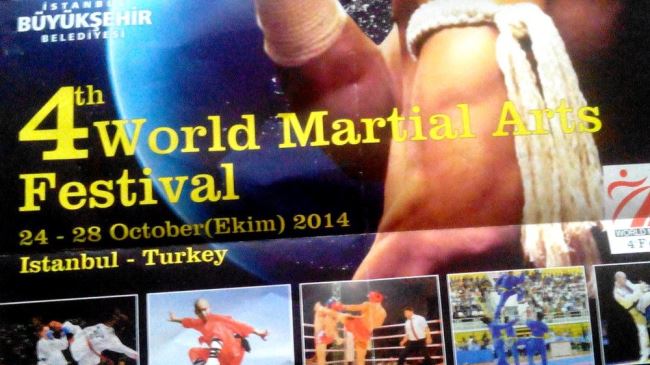 The 4th edition of World Martial Arts Festival started in Istanbul, Turkey, on October 24 and concluded on October 28, 2014.

Iranian athletes have put on an impressive display of skills and stood on the top of the podium at the fourth edition of World Martial Arts Festival in Turkey.

On Monday, the final day of the competitions in the city of Istanbul, Iran’s Muay Thai team, consisting of Saeed Chahardeli, Moslem Lashni, Amin Ahmadi and Qaem Torkashvand, lifted the trophy at the Bağcılar Olympic Sport Hall.

Host nation, Turkey, trailed the Islamic Republic of Iran and was followed by European powerhouse, Russia.

Muay Thai is a combat sport of Thailand that uses stand-up striking along with various clinching techniques. It includes combat on shins and is known as “the art of eight limbs.” The discipline is characterized by the combined use of fists, elbows, knees and shins.

Iranian vovinam squad also ended its campaign at the 4th World Martial Arts Festival with a well-deserved win, and was crowned as the champion of the discipline.

Turkish and Russian vovinam practitioners stood in the second and third spots respectively, behind their Iranian opponents.

Vovinam is a Vietnamese martial art, which uses force and reaction of the rival. It also includes hand, elbow, kicks, escape- and levering techniques.

Also in the super fight discipline on Monday, Iran’s Amir Hossein Qarakhnai stole the show and claimed the gold medal.

The fourth edition of World Martial Arts Festival opened in the Turkish city of Istanbul on October 24, and wrapped up on October 28, 2014.