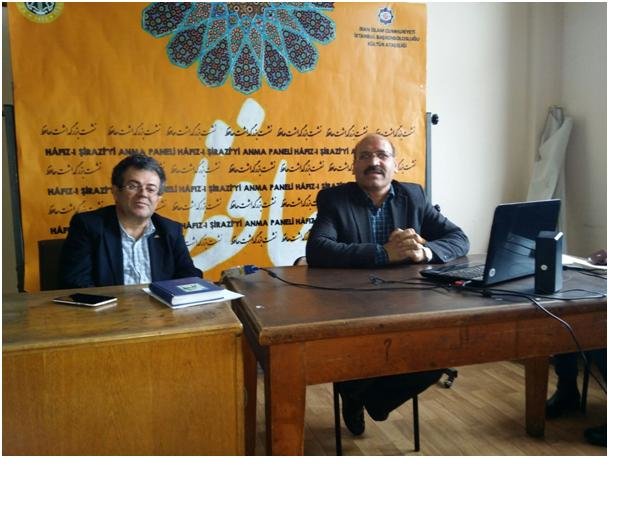 The ceremony was commissioned jointly by the Faculty’s Persian Literature Department and Cultural Section of Iran’s consulate in Istanbul where interested students and faculty staff attended on Monday.

The ceremony was started with a documentary featuring Hafiz’s life, works, and time. The keynote speaker was Dr. Hassanli, lecturer at Shiraz University and Visiting Professor of the Ministry of Science and Research at the University of Istanbul who delivered his speech, ‘Hafiz and the Meaning of Life.’

Dr. Hassanli addressed Hafiz’s social messages, and emphasizing upon the zeitgeist of his lifetime, highlighted his keenness of the vicissitudes of life and his general recommendations on happiness and tolerance. Hassanli said that Hafiz’s balanced and moderate view of the world and afterworld contributed to his popularity with men and women of his time, and giving examples of his verse (in Turkish translation), argued that elements of motifs of happiness and joviality made his poetry widely read by the public.

The second speaker was Serpil Koç Konuksever, PhD student and Faculty teacher assistant. Her speech featured Hafiz’s place in Persian and world literature and its significant impact on Turkish literature. She illustrated the case with lines from Divan of Emiri (a poet of Suleiman the Magnificent era) which was obviously under the influence of Hafiz.

She recited Emiri’s sonnet which he had composed adopting from the first sonnet of Hafiz, and pointed to the common elements in both sonnets. The third speaker was Dr. Güzelyüz, the director of Persian Literature department, who touched Hafiz’s spiritual, social and political thought and his meticulous rendering of social evils of his time in lines of verse. He then explained some of key notions of the Divan of Hafiz.

He also recited a poem by Mohammad Reza Shafiei Kadkani’s apostrophe to Hafiz.