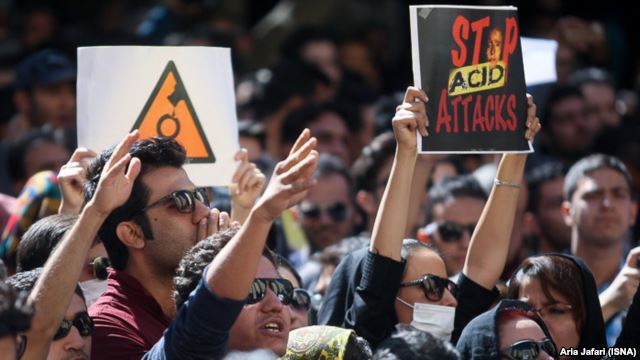 Iran’s judiciary chief has tasked his deputy to lead an investigation into several acid attacks on women that have sown fear across the Islamic republic and provoked rare protests in cities.

With political attention increasingly focused on the attacks — at least four women have been doused in acid by assailants on motorcycles — Iran’s authorities have pledged to find and punish those responsible.

Reports on social networks have claimed that the victims were targeted on the face and body because they were not properly veiled, but Iranian authorities have denied such a link.

President Hassan Rouhani addressed the issue in a meeting with his ministers on Sunday evening, Iranian media reported.

“People should be in no doubt that the government is doing everything to arrest those responsible for these crimes,” he said. “The most severe punishment awaits them.”

The attacks in Isfahan, Iran’s third largest city and a top tourist attraction, occurred earlier this month and prompted more than 1,000 people to take to the streets last Wednesday to demand better security.

There were also two smaller protests in Tehran last week.

“It is an inhuman act, unlawful, violent and anti-Islamic. Everyone must help to arrest those responsible,” said Mohseni-Ejeie, who will have power to oversee the justice and police authorities in Isfahan.

According to justice officials, the last acid attack in Isfahan took place on October 15.

There has been little progress in finding the attackers. Several men who had been arrested were released due to insufficient evidence.

Under Islamic law in force in Iran since the 1979 revolution, women must wear loose clothing, known as hijab, that covers the head and neck and which conceals their hair.

But many women now push the boundaries by wearing a headscarf and thin coat rather than the chador, a traditional black garment that covers the body from head to toe.