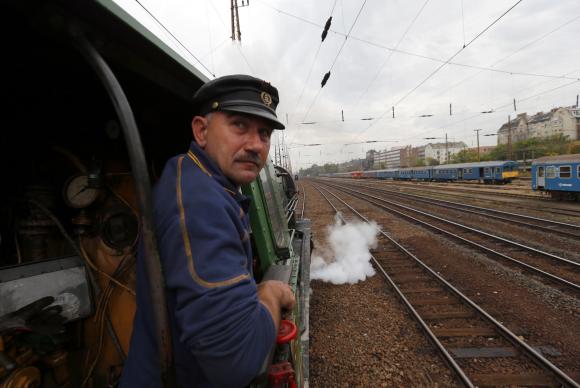 A train engineer looks out of a historic steam locomotive as it pulls a Tehran-bound train into Nyugati Terminus in Budapest, October 15, 2014.
CREDIT: REUTERS/LASZLO BALOGH

TEHRAN (Tasnim) – A luxury train with some 70 foreign tourists on board arrived in the Iranian capital of Tehran after crossing several cities inside the country where the passengers took the time to go sightseeing.

The passengers arrived at their final destination in Tehran on Monday after a two-week trip that started from Hungary’s capital of Budapest by travelling about 7,000 kilometers. They will leave Tehran by plane.

The train had left Hungary on October 15 and crossed Romania, Bulgaria and Turkey on the way to Iran. After entering Iran on October 22, the passengers aboard a set of deluxe cars visited the cities of Tabriz, Zanjan, Yazd, Isfahan, Shiraz, Kerman and Mashhad before reaching Tehran.

Iranian President Hassan Rouhani’s administration, which took the office in August 2013, refers to tourism as a key factor in boosting the country’s economic growth.

Back in May, Rouhani emphasized that foreign tourists should be treated with respect and Iranian-Islamic hospitality.

He also noted that the proper treatment of foreign visitors is much more important than the attractions of archeological sites.

Iran has become a tourist hotspot this year, with tour operators in many European countries reporting significant increases in tourists booking trips to the Persian Gulf country.

With a large number of attractive natural and historical sites, Iran is one of the most touristic countries in the world.