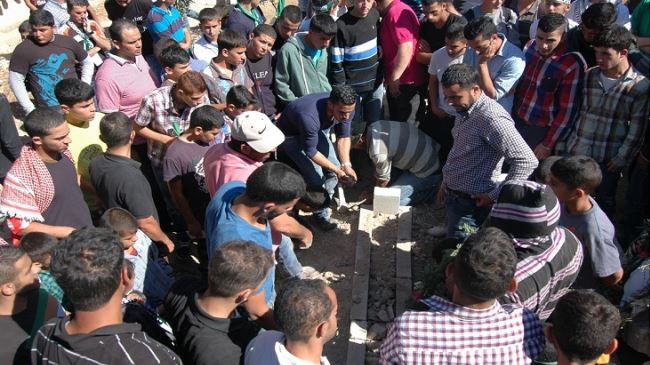 Clashes have erupted between thousands of Palestinians attending the funeral of a Palestinian-American teenager and Israeli military forces in the occupied West Bank.

On Sunday, Palestinian mourners attended the funeral procession of 14-year-old Orwa Abd al-Hadi Hammad, who was shot dead by Israeli forces on Friday, in the West Bank village of Silwad, located 12 kilometers (7 miles) northeast of Ramallah.

The participants waved Palestinian flags and held pictures of the slain teen.

They said Israel should be held accountable for its ongoing crimes against the Palestinians, calling for an immediate end to the murder of Palestinian children at the hands of Israeli forces.

The Israeli troops then fired tear gas and rubber bullets to disperse the mourners.

The development comes a day after scuffles broke out between Israeli forces and Palestinian protesters furious about Hammad’s death in the same area.

Meanwhile, clashes have been taking place every night after Israelis said a Palestinian driver, identified as Abdel Rahman al-Shaludi, rammed his car into a railway stop in al-Quds (Jerusalem), killing a baby girl and injuring eight others on October 22. He later died of injuries sustained from Israeli forces’ gunfire.

The Tel Aviv regime claims that the incident was deliberate, but family members of the 21-year-old driver say it was an accident.