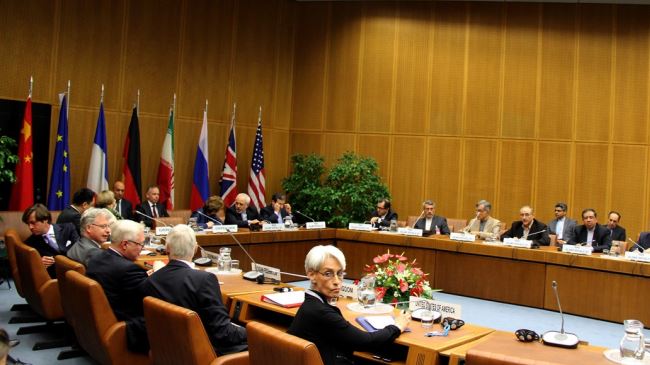 With talks nearly deadlocked and their deadline one month away, six world powers seeking a nuclear deal with Iran have begun discussing whether to again extend negotiations, according to Western officials.

Officials say they believe a deal is still possible by the Nov. 24 deadline, but recognize that the odds are long and want to avoid a collapse of talks that could heighten tension.

The top American negotiator in the Iran talks, Undersecretary of State Wendy Sherman, warned recently that a breakdown in the negotiations could bring a dangerous escalation from both Tehran and the West. (Molly Riley / Associated Press)

“Our priority is still to work hard and try to reach an agreement,” said one Western official, who declined to be identified because of the diplomatic sensitivity of the subject. “But clearly, it would be extremely, extremely challenging.”

The six countries have been trying since January to negotiate a deal that would lift economic sanctions on Iran if it accepts limits on its nuclear program intended to prevent it from gaining nuclear weapons capability. The group — Britain, Germany, France, Russia, China and the United States — and the Iranians have made progress in some areas, but have been unable to reach agreement on several core issues.

U.S. officials, eager to avoid distraction, have insisted that they were not seeking an extension. An official, speaking anonymously in keeping with customary administration ground rules, said, “We are focused on achieving a deal by the deadline.”

In July, the group negotiated a four-month extension of the talks, to the current deadline.

A further extension could be advantageous for the world powers because it could keep in place temporary agreements that bar Iran from moving ahead on controversial aspects of its nuclear program, such as the enrichment of uranium to near the level needed for a bomb. For Iran, an extension offers the advantage of continuing a limited easing of economic sanctions and preventing the United States and Europe from adding more.

[If talks collapse,] escalation will be the name of the game, on all sides. The alternatives [to negotiation] are really quite terrible.- Wendy Sherman, top American negotiator

Agreeing on a new extension could be tricky. Iran could demand significant concessions, such as a further easing of sanctions. There could be resistance from U.S. lawmakers, some of whom contend Iran wants to run out the clock rather than make a deal that would take away its nuclear weapons option.

But there has been some softening of opposition to another extension in recent months. Some who have been wary of a deal, including some in Israel, have indicated that they would prefer a continuation of talks to an overly lenient agreement.

The top American negotiator, Undersecretary of State Wendy Sherman, warned in a speech Thursday that a breakdown in talks could bring a dangerous escalation from both Tehran and the West.

If talks collapse, “escalation will be the name of the game, on all sides,” she said. “The alternatives [to negotiation] are really quite terrible.”

Some diplomats have talked about an extension of as much as six months.

Cliff Kupchan, an Iran specialist and chairman of the Eurasia Group risk-consulting firm, said that if talks are extended, Congress isn’t likely to take any action against Iran until at least February, after a new legislative session begins.

Some lawmakers have been preparing to hit Iran with new economic sanctions if the talks end without a deal.

The seven countries remain far from an agreement on the central issue of how much nuclear enrichment capability Iran could retain under the deal.

The two sides are also far apart on the issue of how the sanctions would be lifted. Iran wants the U.S., European and United Nations sanctions lifted immediately and permanently on signing of a deal; the West wants the easing to be gradual and reversible.

Western diplomats are less optimistic than they were in November, when they agreed to an interim accord that opened the way for a year of negotiations.

Still, diplomats and outside analysts say it remains possible that Iran’s tough demands have been aimed at gaining negotiating advantage and that Tehran may make major concessions in the final hours of talks.