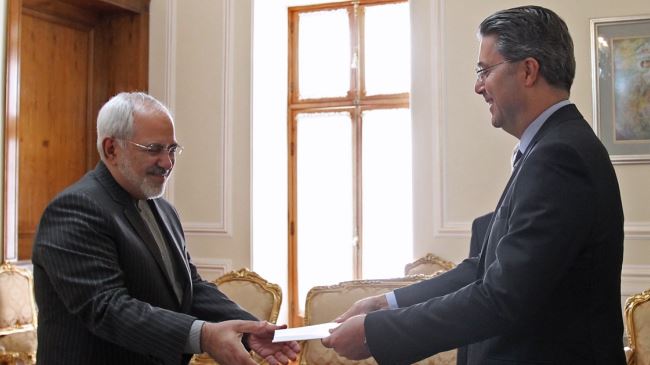 Iran has called on Middle Eastern countries to strengthen collective efforts made to fight terrorist groups, particularly ISIL Takfiri militants, under the present complicated circumstances in the region.

“Currently, regional countries are facing numerous challenges, which they will be able to overcome only through cooperation and consultation,” Foreign Minister Mohammad Javad Zarif said in a meeting with new Turkish Ambassador to Tehran Reza Hakan Tekin on Sunday.

ISIL Takfiri militants made swift advances in much of northern and western Iraq over the summer, after capturing large swathes of northern Syria.

Iran has been providing support for the Iraqi and Syrian governments, including humanitarian aid and consultation, in their campaign against the Takfiri terrorists and was the first country to provide military assistance to Iraqi Kurdish forces fighting the ISIL.

Zarif further praised Iran’s good relations with Turkey and expressed hope that the two sides would improve ties in all fields.

The Turkish ambassador, who submitted a copy of his credentials to the Iranian foreign minister, said the ISIL terrorist group is considered as a threat to Turkey’s national interests.

He added that ISIL militants have brought suffering on Turkey.