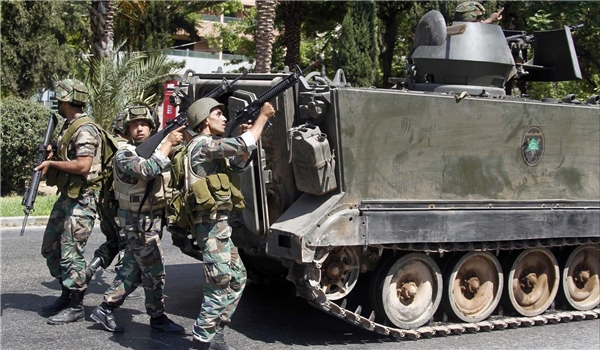 The Lebanese army has seized two bomb-laden cars in the north as clashes rage on between the army and militants in the city of Tripoli.

The army said in a statement issued on Sunday that it seized the cars filled with heavy explosives in the Bhannine area of the Akkar district in North Governorate.

Lebanon’s North Governorate has seven districts and Tripoli is its capital.

The statement further noted that militants attacked Lebanese forces from their position in the al-Salam school in Bhannine.

The Lebanese army finally managed to arrest some of the militants and secure the area. It also confiscated the ammunition and weaponry that the militants had left behind.

The Lebanese army, which has deployed its units to the crisis-hit neighborhoods of Tripoli, also blocked two routes leading to the international highway from the Bab al-Tibbaneh neighborhood to al-Malloula in the northern city. Military helicopters are hovering over the region.

The army has vowed that it will press ahead with its operations “until the gunmen are eradicated and all armed appearances are prevented in Tripoli.”

Several Lebanese civilians and troops have been killed and injured since clashes erupted on Friday in the country’s second largest city.

Over the past months, Lebanon has been suffering from terrorist attacks by al-Qaeda-affiliated militants as well as random rocket attacks, which are viewed as a spillover of the conflict in Syria.