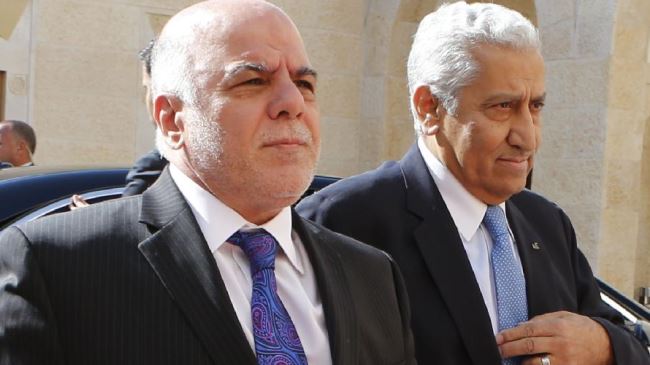 Iraq PM calls on Jordan to help in fight against ISIL

Iraqi Prime Minister Haider al-Abadi has called on Jordan to help Baghdad in its fight against Takfiri ISIL militants, who he said pose a “threat to the entire region.”

The Iraqi premier made the request during a visit to the Jordanian capital, Amman, on Sunday.

According to Amman’s state news agency, Petra, Abadi briefed his Jordanian counterpart on the “security and terrorist challenges facing Iraq, particularly ones from Daesh (ISIL), which is destroying Iraqi civilization.”

He also reportedly said his country was looking forward to developing “political, economic, and trade ties” with Jordan.

In his meeting with the Iraqi prime minister, King Abdullah II said Jordan would give its “full support” to Iraq in “confronting terrorist organizations.”

Jordan borders Iraq’s Anbar Province, which is largely controlled by the ISIL terrorists.

Jordan is also one of the several nations taking part in the so-called US-led airstrikes against ISIL militants in Iraq. Saudi Arabia and Qatar are also part of the coalition.

The ISIL terrorists, who initially set out to fight the Syrian government of Bashar al-Assad, currently control large swathes of territory across Syria and Iraq. They have committed terrible atrocities in both countries, including mass executions and beheading of local residents as well as foreign nationals.

The latest request by Abadi comes as some Jordanian sources have suggested that militants received training to use light and heavy weapons with the help of the US government at a secret base in Jordan back in 2012.