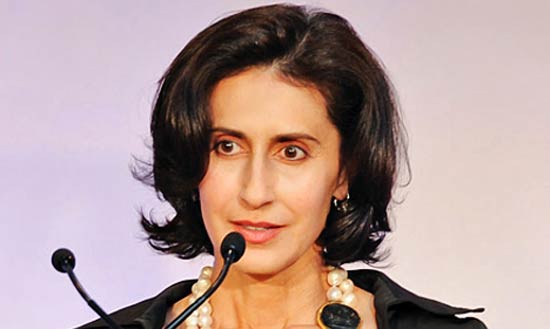 Azita Raji, Nominee for Ambassador to the Kingdom of Sweden, Department of Statei

The United States Embassy in Stockholm is set to get its first female ambassador after the White House announced it was nominating the Iranian-American ex-investment banker Azita Raji to take over from Mark Brzezinski.

Azita Raji is a recognized business strategist, and a former Wall Street executive with international experience, who currently brings her expertise in global financial markets, economics, and strategic thinking to numerous leadership roles in the non-profit sector, by serving as an active trustee, co-founder, and advisor on national boards and appointed commissions, including The President’s Commission on White House Fellowships, Barnard College, Columbia Business School’s Social Enterprise Program, Athena Center for Leadership Studies at Barnard College, Economic Advisory Council of the Center for American Progress, National Portrait Gallery of the Smithsonian Institution, and National Partnership for Women and Families. During the 2012 Obama campaign, Raji served as National Finance Vice Chair and Chair of the Swing State Victory Fund, in addition to serving on the national advisory board of the Democratic National Committee since 2008.

Raji holds a B.A. in architecture and French from Barnard College, Columbia University, and an M.B.A. in finance from Columbia Business School. She is a designated Chartered Financial Analyst and a member of the Bretton Woods Committee.

Raji was born in Tehran, Iran, and spent her early years growing up and studying in Iran and Western Europe. She attended and graduated from an international high school in Lausanne, Switzerland, where she was a competitive downhill skier and chess player, before coming to live in the United States for the first time, to attend college at age 17. Throughout her life she has lived, studied, and worked in the Middle East, Latin America, Western Europe, and the Far East, and is fluent and literate in several languages, including Farsi and French. She has drawn from her wide global awareness and cultural perspective throughout her life and career. Raji currently resides in Northern California with her family.

By The White House