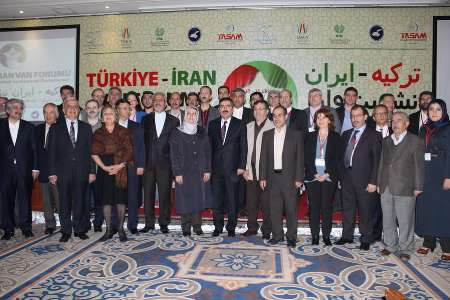 VAN, Oct. 26 (MNA) – Conference on development of cooperation between Iran and Turkey attended by many Iranian and Turkish officials took place in Van, Turkey from October 24-25.

Over 130 Iranian and Turkish officials, university professors, researchers, representatives from the private sector and media took part in in this two-day event during which various aspects of bilateral cooperation were reviewed.

During the final session of this conference which wrapped up last night, Iranian Director General of the Institute for Political and International Studies Mostafa Zahrani stressed that this conference was a symbol of unity and said, “the researches debated cooperation in various economic, cultural, social and political fields and examined ways to achieve this objective. The discussions all led to the topic of a new regionalism.”

Mr. Zahrani noted that Iran and Turkey can develop their relations within the framework of this theory which is inspired by the common culture, politics and history between the two countries.

“During this conference, the two counties’ geopolitical positions at a regional and international level, as well as their potential role in regional developments were discussed,” he said.

Alireza Bikdeli, Iran’s ambassador to Ankara maintained that their visit to Ankara was not limited to attending this conference, and that he has received proposals from officials in the region in regard to cross-border cooperation, inauguration of a consulate in Van, reconstruction of border crossings, and development of transport links between the two countries.

Aydın Nezih Doğan, govorner of Van, for his part, pointed to Iran’s significant position in Turkey’s foreign policies and said, “in advancing relations with Iran, we felt a lack of mechanism. The traditional ties are mostly based on the level of government and businesspeople, and we expect that by holding such conferences, the NGOs, universities and the people will have a greater part to play in these bilateral relations.”

Mr. Doğan stressed the importance of joint research and academic projects and said, “we have to admit, the two countries have not paid due attention to joint research. We are hoping that this will soon be resolved with the cooperation of Iran and Turkey’s research institutions.”

During the two-day conference in Van, sessions on public diplomacy, culture and tourism, education and language, banking and finance, energy and petrochemistry, media and communications, etc. were held and related papers were submitted.