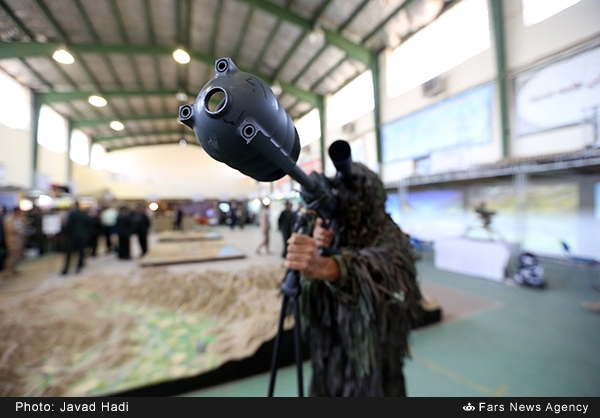 TEHRAN (FNA)- Iran’s new home-made anti-helicopter gun, ‘Arash’, is one of the few in the world.

Arash, a shoulder-launched gun, was unveiled in an exhibition of the weapons and equipment of the Islamic Revolution Guards Corps (IRGC) Ground Force on Wednesday and can also be used against ground and armored targets and enemy trenches.

The 180cm-long weapon is also equipped with optical cameras.

In February, the IRGC test-fired a shoulder-launched weapon with the capability of shooting down choppers in its massive wargames, codenamed Payambar-e Azam 8 (The Great Prophet 8), in Southern Iran. The gun could be Arash, but military officials did not mention its name then.

Elaborating on the missions of the drills, Spokesman of the Wargames General Hamid Sarkheili told reporters that the new shoulder-launched anti-chopper weapons which have been designed and produced by the IRGC’s local experts would be delivered to the operating units in the wargames.

“The 20-mm shoulder-launched missile is an anti-chopper weapon which can hit targets from a distance of 1,400 meters,” Sarkheili stated.

The commander noted that “the new missile launcher is unique and has no foreign rival”.