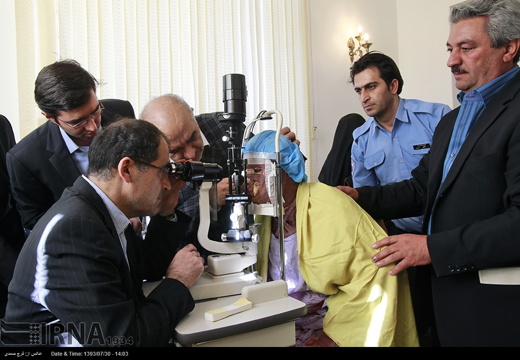 Iranian Health Minister Seyyed Hassan Hashemi says there have been nine acid attacks since the start of this year [March 21, 2014] and that victims, among them four men, have mostly needed outpatient treatment. According to Fararu, a news website, the following is what else the health chief, who is a veteran ophthalmologist, had to say on the sidelines of a gathering of university chancellors from across the nation:

Having examined a patient, the health minister said, “An acid attack victim who is in a Tehran hospital has undergone eye surgery. Her right-eye injuries are more serious. The damage to the left eye is almost 50 percent. She has to undergo several more surgeries.

“In cases involving chemical burns, if part of the skin that comes into direct contact with acid is washed profusely with water, there would be fewer complications. In this case too if those who rushed to the aid of the victim had washed her face with water, she would not have suffered such serious injuries.

“Other victims have not suffered as serious injuries as the woman who is hospitalized in the capital. I have made all the necessary recommendations with regard to the patient who is in an Isfahan hospital.

“The least the government can do at this stage is to provide financial support to the victims. Such violent behaviors deal a blow to society. In keeping with public expectations, such measures should be prevented.”

A look at newspaper headlineds on acid attacks in isfahan over the past few days:

Haft-e Sobh (Oct. 19): “We have found a lead on those who are behind acid attacks in Isfahan,” police reported. Police have so far confirmed four acid attacks allegedly by a motorcyclist.

Roozan (Oct. 19): “Acid attacks are an example of violence against women,” said the vice president.

Ebtekar  (Oct. 19): “Suspicious acid attacks; who carries out these attacks on girls and women in Isfahan?”

Abrar (Oct. 20): “The heart-wrenching scar of acid on the face of Nesf-e Jahan (Half of the World),” wrote the daily in reference to recent acid attacks in the historical city of Isfahan.

Etemad (Oct. 20): “A recent series of acid attacks [in Isfahan] have met with public resentment in society.”

Ebtekar (Oct. 21): “The Judiciary will put the acid attacks case on a fast track.”

Emtiaz (Oct. 21): “Police are one step away from arresting the one(s) behind acid attacks.”

Jomhouri Islami (Oct. 21): “Four individuals have been arrested in Isfahan in connection with the recent acid attacks,” said the deputy interior minister.

Abrar  (Oct. 23): “Acid attacks carry the death penalty if they are designed to terrorize the public,” the chairman of parliament’s Judicial and Legal Committee said.

Esfahan Emrooz (Oct. 23): “Police investigations into acid attacks are underway. The public should not pay attention to rumors about the case,” said the prosecutor of Isfahan [where a recent spate of acid attacks has put residents on edge].

Etemad  (Oct. 23): The health minister [who is an ophthalmologist] has examined the eyes of a girl who has suffered serious injuries in a recent acid attack in Isfahan.

Kayhan (Oct. 23): “The acid attacks in Isfahan are unrelated to morality laws,” the vice president for legal affairs said.

By Fararu, translated by IFP