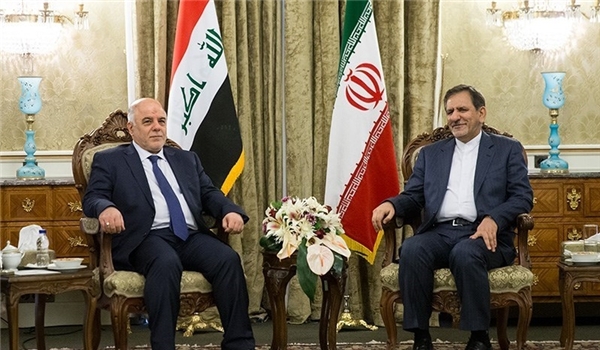 TEHRAN (FNA)- Iranian and Iraqi officials in a joint statement on Thursday stressed their enthusiasm for the further reinvigoration of ties and cooperation between the two Muslim states.

The joint statement was issued at the end of al-Abadi’s visit to Tehran.

The two officials voiced satisfaction over the growing trend of relations between Tehran and Baghdad, and called for further promotion of ties between the two capitals.

The Iraqi premier had arrived in Tehran on October 20, heading a high-ranking delegation for an official visit.

Al-Abadi visited Iran upon an invitation by Jahangiri.

Also on Tuesday, Iran and Iraq, once again, emphasized their determination to widen and deepen security cooperation in fight against terrorist and extremist groups, particularly against the ISIL.

In a meeting between Secretary of Supreme National Security Council (SNSC) Ali Shamkhani and al-Abadi, the Iranian official said that restless campaign against Takfiri terrorists and their supporters stands atop Iran-Iraq cooperation agenda.

“Continuous close cooperation between the two countries aimed at boosting both countries’ strategic capabilities and the two nations’ interests are vital,” he added.

Al-Abadi, for his part, said that the Iraqi government and nation would never forget Iran’s effective cooperation and contributions in campaign against terrorism in Iraq.

“My country is today engaged in a full scale, comprehensive war against terrorism and is determined to uproot the sedition of terrorism in Iraq relying on the brave Iraqi combatants,” the premier said.