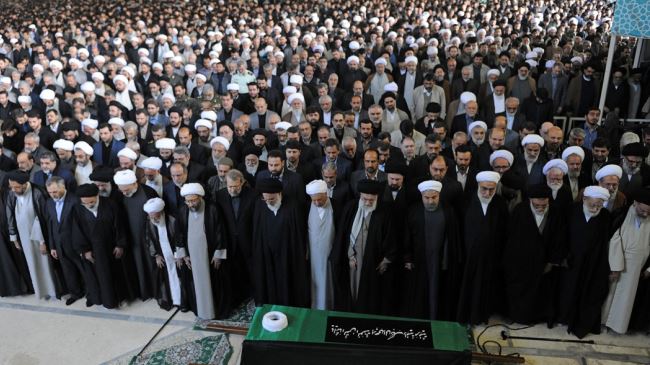 Prominent Iranian cleric Ayatollah Mohammad-Reza Mahdavi Kani has been laid to rest in the south of the capital, Tehran.

The funeral held on Thursday was attended by a huge crowd of mourners, including a host of state and military officials.

Earlier in the day, Leader of the Islamic Revolution Ayatollah Seyyed Ali Khamenei led mass prayers at a ceremony in remembrance of the top religious figure.

Chief of Staff of the Iranian Armed Forces Major General Hassan Firouzabadi was among the military top brass attending the ceremony.

The prayers were followed by a procession where mourners paid tribute to the late prominent religious figure.

Ayatollah Mahdavi Kani, 83, passed away in Tehran on Tuesday after he went into a coma on June 4 due to a major heart attack.

“This great and pious man appeared always and everywhere in the position of a religious scholar and an honest politician and a candid revolutionary,” Ayatollah Khamenei said.

The late cleric who also was a veteran politician was elected chairman of the Assembly of Experts in March 2011. The high-ranking body of experts elects and oversees the activities of the Leader of the Islamic Revolution.

The senior Iranian official was also a founder and the leader of the Combatant Clergy Association, a prominent religious, cultural and political foundation formed with the objective of protecting the achievements of Iran’s Islamic Revolution.