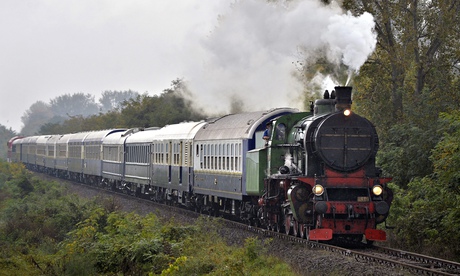 A steam engine pulls the Golden Eagle Danube Express after its departure from Budapest on 15 October, en route to Tehran. Photograph: Zoltan Mathe/EPA

A long-distance luxury train, operating in the style of the Orient Express, arrived in the Iranian city of Zanjan from Budapest on Thursday, in a rare private rail visit to the Islamic republic.

Iran’s cultural heritage and tourism organisation said some 96 passengers from at least 14 different countries were aboard the Golden Eagle Danube Express, according to the semi-official Isna news agency. “It arrived in Zanjan at 17.30 local time,” Gholamreza Najafloo, a spokesperson, told Iranian reporters.

The Cheshire-based Golden Eagle Luxury Trains, which has organised the Jewels of Persia tour, said it marked the first time a European private train had been permitted to enter Iranian territory.