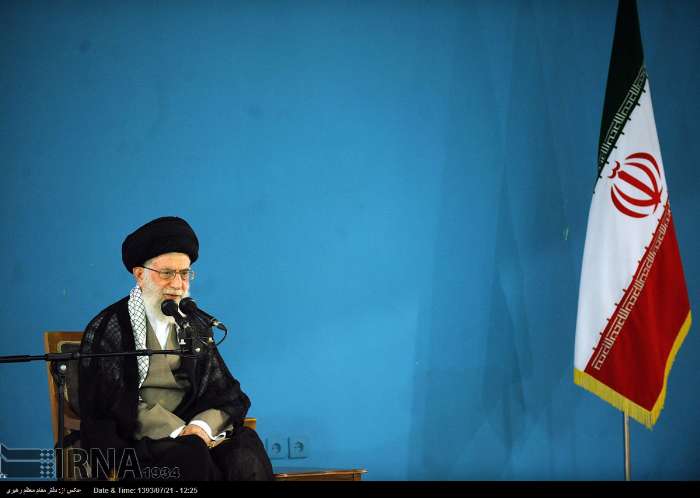 Leader of the Islamic Revolution Ayatollah Seyyed Ali Khamenei says Iran has no trust in the sincerity of governments claiming to be fighting the ISIL Takfiri militants.

“We have no trust and confidence in the honesty of those making these remarks against ISIL and believe that the issue of ISIL and terrorism should be resolved by regional countries,” Ayatollah Khamenei said.

The Leader said Iran attaches great significance to security, welfare, might and dignity of Iraq as an important country in the Middle East region, adding that the Islamic Republic firmly and seriously supports the new Iraqi government.

“The present circumstances in the region, including in Iraq, are the outcome of irresponsible policies adopted by transregional powers and certain regional countries in Syria,” Ayatollah Khamenei said.

“We believe that the Iraqi nation and government, particularly the country’s youths, are capable of overcoming terrorists and establishing security and there is no need for the presence of foreigners,” the Leader added.

Ayatollah Khamenei also stated that Iraq has pursued a correct and wise policy in recent years by refusing to allow its soil to be used against Syria.

The Leader described as quite correct the new Iraqi government’s policy of fostering national, ethnic and tribal unity and stated that it would be meaningless to divide Iraqis into Shia, Sunni, Kurd and Arab.

Iran’s President Hassan Rouhani also said those governments that have formed a coalition to fight terrorism should first cut off the financial lifeline of terrorist groups.

“Those who claim to be fighting terrorism and those who have formed a coalition [against terrorism] should in the first step make efforts to have financial aid to terrorist groups cut,” President Rouhani said.

Noting that terrorism has grown into a major problem for all countries in the Middle East, the president warned that the US-led anti-ISIL coalition’s airstrikes against the terrorists’ positions will only benefit the Takfiri group in the long run.

“Iran believes that the main responsibility in the fight against terrorist groups should be shouldered by Iraqi government and popular forces. The more united the Iraqi nation…the more successful they will be,” the Iranian president pointed out.

He emphasized that Iran has been supporting the Iraqi nation and army in their fight against terrorist groups from the very first day and would proceed with this policy until the end.

Rouhani vowed that Iran would spare no effort in helping the Iraqi government and called on regional governments to counter terrorism in a “coordinated and integrated” way to uproot this phenomenon.

“The Islamic Republic of Iran pursues the expansion of all-out strategic ties with Iraq based on the common interests and expediencies of the two countries and the region and will cooperate with Iraq in countering the challenges ahead, particularly for the establishment of security and the eradication of the ominous phenomenon of terrorism,” Afkham said.

She pointed to an upcoming visit by Iraqi Prime Minister Haider al-Abadi to Tehran, mentioning stability, peace and the expansion of regional relations as the future prospect of cooperation between Iran and Iraq.

“Close consultation between the two countries in view of the sensitivity and complicated nature of regional developments, and also the effective role of Tehran and Baghdad in restoring peace and stability to the region as well as the need for the integration of ongoing efforts in fighting terrorism are very important issues,” the Iranian spokesperson pointed out.

She added that the Iraqi premier is scheduled to hold talks with senior Iranian officials on the latest developments in the region and ways to settle regional problems during his visit to Tehran.

Iran’s Foreign Ministry has also condemned the deadly bombings against pilgrims in the holy Iraqi city of Karbala and expressed sympathy with the families of the victims.

Iranian Foreign Ministry Spokeswoman Marzieh Afkham voiced the Islamic Republic’s firm support for the Iraqi nation and government in their fight against the ominous phenomenon of terrorism.

She said that national unity and solidarity among different Iraqi tribes and groups as well as the strong determination of the Iraqi government, nation and army in confronting terrorism can thwart the current plots against Iraq and the region.

Afkham also called on the international community to take a firm stance with regard to the fresh wave of terrorist attacks in Iraqi cities.

Iran has also categorically rejected a report by Reuters alleging that the Islamic Republic has sought partial removal of the sanctions imposed on the country over its nuclear energy program.

“This issue is not right at all,” Iranian Foreign Ministry spokesperson Marzieh Afkham said, referring to the Tuesday report, which had alleged the country is no longer demanding a total end to economic sanctions.

Afkham said, “None of the speculations, which are made in some foreign media usually with certain ill-intentions regarding the details of the nuclear negotiations, are true.”