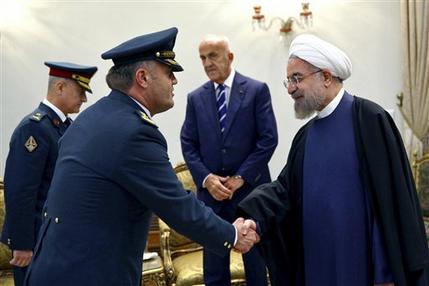 TEHRAN, Iran (AP) — Iran’s defense minister said his country is ready to ship defensive materials to Lebanon to aid its army in the fight against Sunni extremists on Monday, the semi-official Mehr news agency reported.

“We will provide an Iranian-made consignment of defensive items to the Lebanese army for their use in fighting the group and other terrorist groups,” Dehghan said. The Lebanese troops have been fighting militants from the Islamic State group since fighting spilled into the Mediterranean country from neighboring Syria.

Dehghan did not elaborate on the contents of the shipment but said it was a gift intended for “swift action against a possible threat.” The United Nations imposed an arms embargo on Iran in 2007, banning it from importing and exporting weapons.

“The aid mainly includes items for ground forces – for confronting terrorist currents,” he said, adding that Iran was also ready to provide training to the Lebanese army.

Iran’s former ambassador to Beirut, Ghazanfar Roknabadi, said the U.S. and some groups in Lebanon are worried about the aid because they are concerned it could be used against Israel.

“They say the aid breaks sanctions, but it is just a gift and there is no money in return,” said Roknabadi, adding that Iran had proposed gifting the aid years ago.

Iran, a major weapons manufacturer in the region, has in the past said it exported military products to scores of countries, although it has never revealed details.