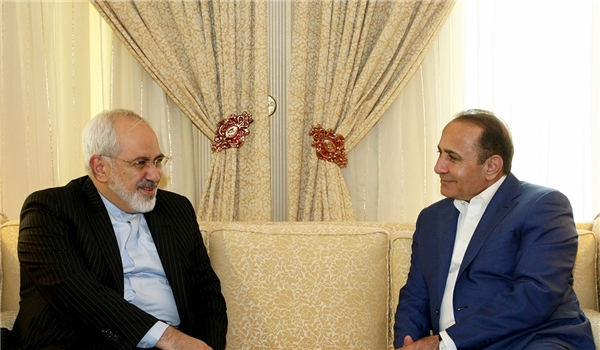 TEHRAN (FNA)- High-ranking Iranian and Armenian officials in a meeting in Tehran underlined the necessity for the further expansion of the relations between the two countries in all arenas, specially in trade and tourism fields.

During the meeting between Iranian Foreign Minster Mohammad Javad Zarif and Armenian Prime Minister Hovik Abrahamyan on Monday afternoon, the two officials exchanged views on the growing trend of the development of bilateral relations in all areas, specially in economic, trade, infrastructures and tourism fields, and underscored the necessity for removing the existing obstacles.

They also called for continued reciprocal visits by Iranian and Armenian officials to consult and exchange views on the bilateral relations and other issues of mutual interest.

According to Iran’s Commercial Attaché in Yerevan Hamaiak Avadis Yanes, the trade turnover between the two neighboring countries hit $293mln in 2013.

Iranian Energy Minister Hamid Chitchian and his Armenian counterpart Yervand Zakharian in a meeting in Tehran on Saturday voiced their countries’ willingness to enhance bilateral relations, particularly in the energy exchange sector.

During the meeting, Chitchian said that there has been good cooperation between the two countries over the past two decades in the field of energy.

He said the two sides agreed to launch the third energy transfer line between Iran and Armenia and construction of two hydro-electric power plants on both sides of the Aras River.

The Armenian minister, for his part, expressed the hope that work on the projects would begin soon.

Zakharian said that once these projects come on stream, energy exchange between Iran and Armenia would increase two or three folds.