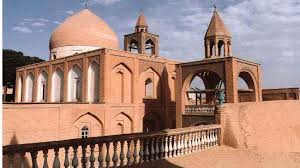 Isfahan, Oct 21, IRNA – A ceremony was held in this ancient provincial capital city on Monday to mark the 350th anniversary of construction of the Holy Savior Cathedral also known as Vank Cathedral in Isfahan.

Vank Cathedral, also known as the Church of the Saintly Sisters, is the most visited cathedral in Isfahan.

The ceremony was attended by Armenian Church Leader His Holiness Aram I, Archbishop of Isfahan province and southern parts of Iran Babken Charian and a group of Isfahan’s Armenian residents and officials.

During the service, Archbishop Charian recited Prayers of Lament and holy bread was distributed among worshippers.

Vank Cathedral was one of the first churches to be established in the city’s Jolfa district by Armenian deportees settled by Shah Abbas I after the Ottoman War of 1603-1605.

The monument is a symbol of coexistence among divine religions and an artistic architectural masterpiece.

Its construction is believed to have begun in 1606, and completed with major alterations to design between 1655 and 1664 under the supervision of Archbishop David.

The cathedral consists of a domed sanctuary, much like a Persian mosque, but with the significant addition of a semi-octagonal apse and raised chancel usually seen in western churches. The cathedral’s exteriors are in relatively modern brickwork and are exceptionally plain compared to its elaborately decorated interior.