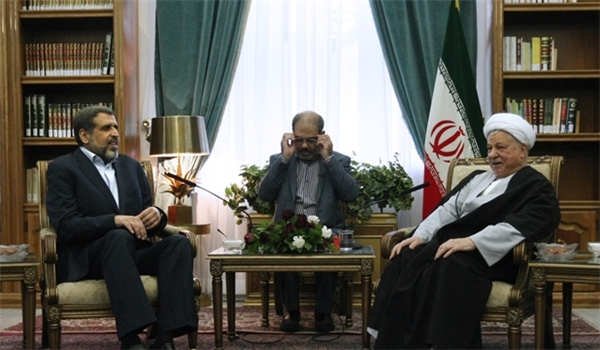 TEHRAN (FNA)- Chairman of Iran’s Expediency Council (EC) Akbar Hashemi Rafsanjani praised the Palestinian nation and resistance for their standing against Israel in the recent 51-day war on Gaza and targeting all parts of the occupied territories in their missile strikes.

“The usurper regime of Israel was affected by its insecurity to such a degree that many Israeli people had to live in undergrounds and shelters during the war,” Rafsanjani said in a meeting with visiting Secretary General of the Palestinian Islamic Jihad Movement Ramazan Abdullah in Tehran on Monday.

“They saw that the resistance forces target any point they want with their missiles without engaging in face-to-face confrontation and realized that the iron dome and the savagery of the Zionist soldiers could not return security to the Israel,” he continued.

Rafsanjani pointed to his several meetings with senior foreign officials during and after the recent Gaza war, and said, “Most foreign analysts were astounded how the people of Gaza could keep so many missiles hidden from the Zionist regime’s spies and intelligence satellites.”

He underlined that the resistance movement’s officials have important duties to fulfill after the Gaza war, and said, “If you want to bring the Israeli army to its knees through you resistance, you should plan for new phases to surprise everyone again.”

At the end of his statements, Rafsanjani reiterated that supporting the Palestinian people is among Iran’s fundamental and strategic policies that remains unchanged.

Following the recent 51-day Israeli onslaught on Gaza, Supreme Leader of the Islamic Revolution Ayatollah Seyed Ali Khamenei strongly condemned the Israeli attacks on the Palestinians, and underlined that Palestinians should continue their armed struggle against Tel Aviv and arm the West Bank to the very same end.

“We believe the West Bank, too, should be armed just like Gaza and those who are interested in the fate of the Palestinians must work in this respect so that the pains and miseries of the Palestinian people will be decreased due to their mighty hands and the weakness of the Zionist enemy,” he underlined during his remarks in late July.