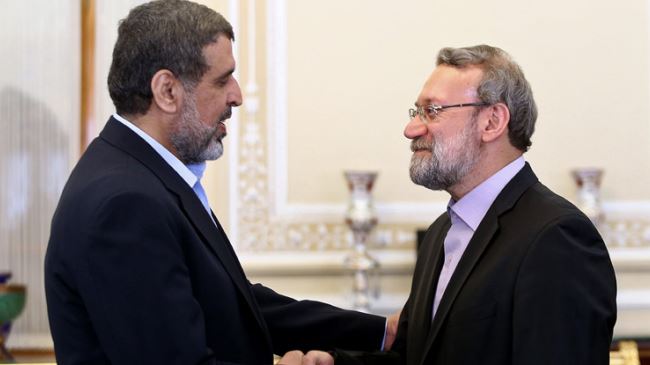 “Islamic countries should take immediate action, away from propaganda fanfare, to help the oppressed Gazans reconstruct” their war-ravaged land, said the top Iranian lawmaker in a Sunday meeting with Secretary General of the Islamic Jihad of Palestine Ramadan Abdullah in Tehran.

Larijani reaffirmed Iran’s unflinching support for the Palestinian nation’s resistance in the face of the Israeli occupation, saying Western media propaganda about the recent developments in the Middle East must not be allowed to sidetrack the issue of Palestine.

The Zionist regime and its regional allies seek to create a rift between people and resistance forces, said the Palestinian official, stressing that such a policy is doomed to failure.

He also praised earlier remarks by Leader of the Islamic Revolution Ayatollah Seyyed Ali Khamenei, who had called for anti-Israel armed resistance in the occupied West Bank, saying such a move would further strengthen the resistance front.

On July 23, Ayatollah Khamenei said “armed resistance and its expansion to the West Bank is the only way to confront this savage [Israeli] regime” until its annihilation.

Israel unleashed aerial attacks on Gaza in early July and later expanded its military campaign with a ground invasion of the Palestinian strip. Over 2,130 Palestinians, including around 570 children, lost their lives and some 11,000 were injured in the raids. Tens of Israelis were also killed by retaliatory rockets of the Palestinian resistance.