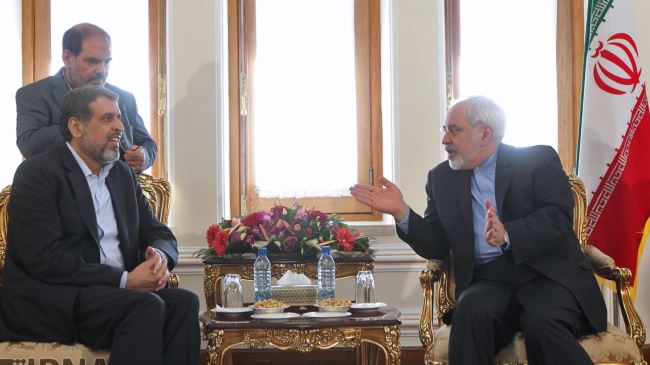 Iranian Foreign Minister Mohammad Javad Zarif has reiterated the Islamic Republic’s unwavering support for the Palestinian people and their resistance against Israel.

In a meeting with Secretary General of the Islamic Jihad Movement of Palestine Ramadan Abdullah Mohammad Shalah in Tehran on Sunday, Zarif said Iran will always stand by the Palestinian nation and assist them in the reconstruction of the war-hit Gaza Strip.

The top Iranian diplomat congratulated Palestinians on their triumph against Israel in the Tel Aviv’s seven-week aggression against the impoverished Strip.

Zarif said that the victory of the Palestinian resistance against Israel have shattered the “invincibility myth” of the Zionist regime’s army.

Abdullah, for his part, hailed Iran’s permanent support for the Palestinian nation and their resistance movement.

He said the resistance of the Palestinian nation in 51 days of fighting with “one of the world’s largest arsenals was a great and exemplary achievement in the course of resistance.”

Israel launched a deadly onslaught on the besieged Gaza Strip on July 8. Gaza health officials say over 2,140 Palestinians, including 577 children, were killed in the Israeli aggression. Over 11,100 others, including 3,374 children, 2,088 women and 410 elderly people, were injured. Dozens of Israelis were also killed by the Palestinian retaliatory rockets.

The Israeli aggression ended on August 26 with an Egyptian-brokered truce.