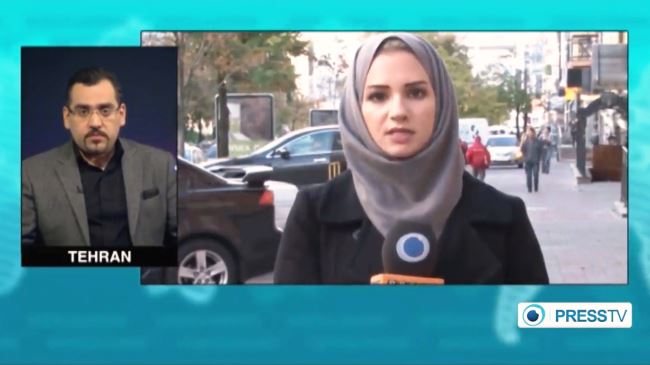 Find out what happened to Serena, Press TV director calls on Turkey

Press TV news director Hamid Reza Emadi says the “suspicious death,” of the news channel’s correspondent in Turkey is a tragedy for “anyone who wants to get the truth.”

Emadi made the remarks in an interview with Press TV on Sunday following Serena Shim’s death across the border from Syria’s Kurdish city of Kobani, where the ISIL terrorists and Kurdish fighters are engaged in heavy battles.

“Serena told the stories,” Emadi said, referring to Turkey’s role in the crisis, including “how Ankara collaborated with those terrorists,” and “blocked Kurdish fighters from entering Kobani” to help tackle the ISIL.

On Friday, Shim, an American citizen of Lebanese origin, told Press TV that the Turkish intelligence agency had accused her of spying probably due to some of the stories she had covered about Turkey’s stance on the ISIL terrorists in Kobani and its surroundings, adding that she feared being arrested.

Emadi called the “car accident” version of Shim’s death an “infantile argument” by Turkey. “We are not going to buy that,” he noted.

“We believe that the Turkish government has to be held accountable before the international community. It has to find out exactly what happened.”

The news media director went on to say that Shim was an American national who died “under very suspicious circumstances” inside Turkey. “We are waiting to see whether the US government is reacting or asking Ankara for clarification.”

Shim will not return to her children in Lebanon just because she “criticized a certain country that is creating chaos in the region by supporting terrorists both inside Syria and Iraq,” Emadi said.

He further noted that “Press TV has every right to pursue the matter legally.”

In 2012, Press TV lost another correspondent, Maya Nasser, who was shot in the neck and the chest by a foreign-backed sniper in the Syrian capital Damascus.

Emadi slammed the “so-called” human rights organizations for refusing to condemn killing of journalists like Nasser. “Just because they reported the truth. They didn’t report what the US media wants them to report.”

Shim, a mother of two, covered reports for Press TV in Lebanon, Iraq, and Ukraine.

She was on a mission on the Turkish side of the border across the strategic town to cover the ongoing war there.

Her car collided with a heavy vehicle upon return from a report scene in Suruç, a rural district of Şanlıurfa Province of Turkey.

The identity and the whereabouts of the truck driver remain unknown.

Shim said she was among the few journalists who had obtained stories about Takfiri militants’ infiltration into Syria through the Turkish border, adding she had gained access to images showing militants crossing the border in trucks belonging to the World Food Organization and other NGOs.