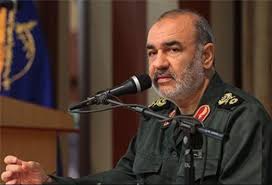 Iran inevitable to act against enemy if neighbors lag

TEHRAN, Oct. 18 (MNA) – IRGC deputy-commander has said Iran would inevitably act if neighbors show incompetence in dealing with threats against Iran from their side of borders.

Brig. Gen. Hossein Salami who was speaking to the press in 110th Salman Farsi Infantry Commando Brigade in Sistan and Baluchistan said that Iran’s policy of noninterference in others’ internal affairs would change to action if “we feel that Pakistan and other neighbors show incompetence in dealing with threats against Iran from their side of borders.”

“Sistan and Baluchistan is a geostrategic region for the Islamic Republic of Iran, and its security and development is a priority for the country, and its people, like other people in borders lend much value to defend their country,” said the commander, “the Islamic Republic works with local tribal communities to provide security, and they know well the circles seeking to destabilize the province; the greatest capabilities are local people themselves to secure this stability in the borders,” he added.

“For IRGC, this is a good strategy, well organized after the martyrdom of Gen. Nourali Shoushtari and based on his security paradigm,” Salami told the press.

He pointed to the ‘intelligence upper-hand’ of the IRGC over terrorist groups, who the Gen. described as ‘trifle and disintegrated,’ which provides the IRGC the best strategy to surveillance of the enemies and their scenarios.

Salami stressed on the public participation as the basis for this dominance in intelligence, since “public knows well foreign agents and enemies acting undercover; their participation improves the level of intelligence collected in the region.”

“Our model of cooperation with public has brought success in aborting conspiracies by the enemies against the security, and we have near-complete dominance over the opposition proceedings in and beyond the borders,” he asserted.

Commenting about recent clashes with terrorists and drug cartels and the IRGC’s measures to deal with the border troubles, Salami said that “our defensive system will closely watch these groups everywhere along the borders and if they continue their trouble making, we will take necessary coercive measures to solve the issue; we recommend these groups to return back to the country where they will be received with tolerance,” warning that “however, the IRGC sees no limits in fighting these opposition groups.”