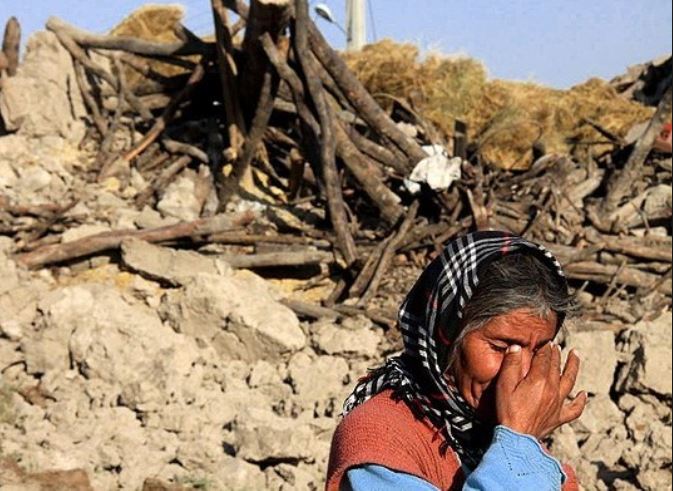 The theme for this year’s international day for disaster reduction focuses on older people and disasters: resilience for life. In this picture an elderly woman who was affected by the 2003 Bam earthquake is depicted. Credit: ASIA News

Every year on 13th October, International Day for Disaster Reduction (IDDR) is commemorated worldwide. The objective of the observance is to raise awareness of how people are taking action to reduce their risk to disasters. The theme for this year focuses on older people and disasters: Resilience for life.

To commemorate the day, as well as the National Week of Disaster Reduction in Iran an event was held in Tehran on 11 October organized by the National Disaster Management Organization at the Ministry of Interior chaired by Deputy Minister and Head of National Disaster Management Organization (NDMO), Mr. Esmaeel Najjar with the participation of several government officials from both Tehran and provinces and UN officials including FAO Representative , Mr. Serge Nakouzi and the UNDP Deputy Resident Representative, Mr. B. Murali.

In his opening remarks Mr. Najjar said: “Within the past decade, the most important factors that have confronted development across the world with challenges are:

International strategy for reducing the risks is undoubtedly the most important part within the UN system which without taking into consideration gender, race, class, language and nationality differences and with the aim of sustainable development as well as reducing damages caused as a result of natural disasters. The ultimate goal is to build resilient nations against disasters.”

Mr. Najjar then stressed on the need for cooperation between national and international organizations for overcoming challenges faced by disasters.

The UN Secretary-General message on the occasion of IDDR was delivered by UNDP Deputy Resident Representative.  “This year’s commemoration of the IDDR is an opportunity to recognize the role of older men and women in fostering resilience.  When a natural disaster hits, older persons suffer disproportionately high levels of death and injuries […] on this IDDR, let us remind ourselves that building resilience to disasters has no time limit in one’s life, it starts in youth and grows more important as we age,” states Mr. Ban Ki-Moon.

Mr. Murali then shared with the attendees some additional thoughts about this important day.  In this regard, he said: “During the past 10 years, the most comprehensive initiative which globally has been promoting disaster risk reduction inHyogo Framework for Action (HFA) which has provided a unique opportunity to promote a strategic and systematic approach to reducing vulnerabilities and risks tohazards.  This is the approach which the UN is taking through its efforts to support the Government to face disasters.”

He highlighted the ongoing joint programme of UNDP with NDMO and other partners on Strengthening Disaster Risk Reduction in Iran and the Human Development Report of 2014 whose theme is “Sustaining Human Progress: Reducing Vulnerabilities and Building Resilience” which is to be launched in Iran shortly.

Mr. Murali concluded his remarks by assuring that the United Nations in Iran stands ready to help and assist the Government of Iran upon their request.