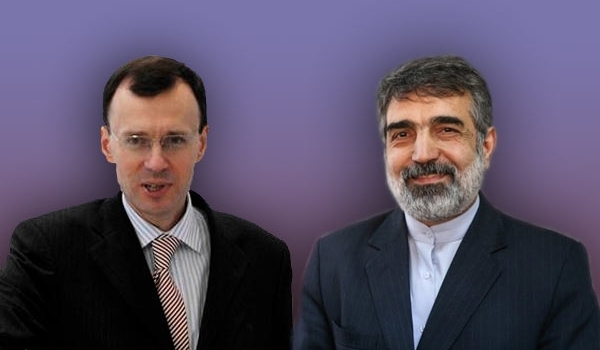 TEHRAN (FNA)- Iranian and Russian officials discussed the latest developments in the nuclear talks between Tehran and the Group 5+1 (the five permanent UN Security Council members plus Germany) and the progress made in the country’s cooperation with the International Atomic Energy Agency (IAEA).

During the meeting in Tehran on Thursday, Spokesman of the Atomic Energy Organization of Iran (AEOI Behrouz Kamalvandi and Deputy Director General of the Russian State Atomic Energy Corporation Rosatom Niolai Spasski explored the avenues for bolstering and reinvigorating bilateral ties.

The two sides also discussed the current state and prospects of nuclear cooperation between the two countries.

Iran and the six major world powers (the US, Russia, France, Britain and China plus Germany) ended their 8th round of nuclear negotiations in Vienna an hour ago.

Iranian Foreign Minister Mohammad Javad Zarif and EU Foreign Policy Chief Catherine Ashton presided over the 8th round of the talks between Tehran and the Group 5+1 (the five permanent UN Security Council members plus Germany) in the Austrian capital.

On Tuesday, Zarif said Tehran and the G5+1 have not yet reached an agreement over their main bones of contention.

“There are outstanding differences, but it doesn’t mean that these differences cannot be resolved,” Zarif told reporters after meeting Ashton in Vienna.

“Of course, this doesn’t mean that a solution cannot be achieved. Everyone believes that this issue can be settled since actually, Iran’s nuclear program is a peaceful program and a reality on the ground,” he added.

Stressing that working on solutions is necessary, he said that during the Tuesday talks among the Iranian, EU and the US officials, the participants proposed different solutions in a series of serious discussions, but they have not yet reached a common conclusion and “I believe that in case there is a political will, reaching a solution will be possible”.

He noted that as long as the two sides don’t agree on all issues, no agreement can be said to have been obtained on any single issue.

“Yet, we still have time to reach an agreement,” the Iranian lead negotiator concluded.

Upon arrival in Vienna, the Iranian, American and EU negotiators had two days of trilateral talks on October 14-15.

Earlier this month, Kamalvandi said Tehran and Moscow were “close to reaching final agreements on the construction of two power plants” in Iran’s southern province of Bushehr before the end of the current Persian calendar year (20 March 2015).

In September 2013, Iran officially took over from Russia the first unit of its first 1,000-megawatt nuclear power plant in Bushehr for two years.

The initial construction of the Bushehr facility began in 1975 by German companies, but the work was halted following the 1979 Islamic Revolution.

After signing a deal on the construction of nuclear plants in 1992, Iran and Russia reached an agreement in 1995 to complete the Bushehr plant.

Four plants will be built in the southern port city of Bandar Abbas, two in the eastern city of Tabas, and two in the northwestern city of Sahand, according to the Iranian minister.

On September 9, Russian Energy Minister Alexander Novak said in Tehran that Iran and Russia had signed projects worth 70 billion euros to develop trade and economic ties.