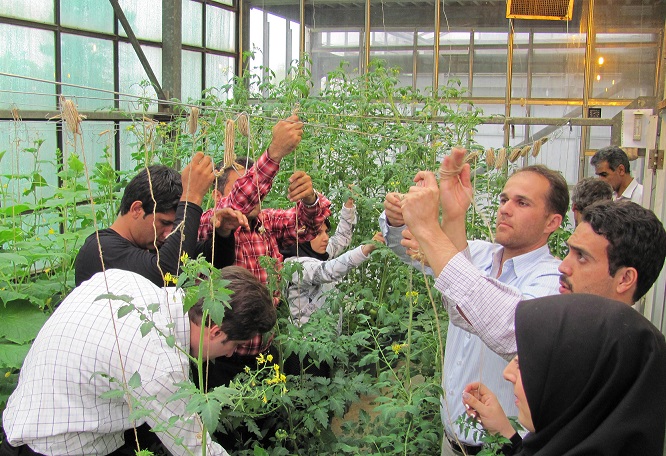 Feeding the world, caring for the earth

Speaking at a ceremony commemorating the World Food Day 2014 in Tehran, the UN’s Representative of the Food and Agriculture Organization (FAO) in the Islamic Republic of Iran, Dr. Serge Nakouzi underlined the need for a ‘paradigm shift towards healthier and more sustainable food systems’.

We can no longer rely only on an input-intensive model to increase food production. We need to use less agricultural inputs, especially water and chemicals, in order to put agriculture, forestry and fisheries on a more sustainable and productive long-term path.’ Dr. Nakouzi drew attention to the significance of farming families in sustaining food security, and referred to need to embed this approach in the formulation of the Sixth National Five-Year Development Plan for Iran.  He called for consideration to be given to the significance of family farming for food security and nutrition, natural resource management and local economy generation.

85% of the farming in Iran is done by family farmers.

Also, speaking at this ceremony was Deputy of the Ministry of Agricultural Jihad (MOAJ), Dr. Bakhshandeh who said, ‘That close to one billion people on the planet still suffer from chronic hunger is a warning to the global community, which needs a solution’. He further called for effective efforts by developing countries to combat hunger with the support from international organizations. Referring to FAO’s theme for World Food Day 2014— “Family Farming: Feeding the World, Caring for the Earth”—he said, ‘85% of the farms in Iran are managed through family farming.’

He listed training, lifelong education, capacity building and empowerment of family farmers as means of sustainable development and therefore, reducing poverty and creating accountability among the farmers in terms of environmental conservation. Underlining the efforts of the Government and the specific guidance and attention by the President of Iran, Dr. Bakhshandeh announced that the Iranian equivalent of US$ 10 billion within a four-year timeframe for carrying out essential restoration of one million hectares of land and irrigation network across Iran.

The UN’s Resident Coordinator, Mr. Gary Lewis also delivered a keynote speech at this event.  He stated that not only the world food situation but also the amount of food we can produce and the way in which it is distributed continue to cause serious global concern.  Reminding the audience that climate change projections will expose Iran, to a hotter, drier future, Mr. Lewis stated that several of the United Nations agencies – including FAO, WFP and UNDP – are working with their counterparts to support Iran in taking the required actions. The UN Resident Coordinator noted the fact that in considering food security, attention needs to be paid to nutrition. “Iran is in the middle of a nutrition transition,” he said.  “Although the number of people suffering from hunger is lower than ever before, changing dietary patterns are leading to increased incidences of non-communicable diseases – like obesity and, ironically, poorer nutrition.

To read the full text of Mr. Lewis’ remarks in English, please clickhere.

Another speaker in this event was the envoy of the I.R. Iran to FAO, Dr. Majid Dehghan- Sho’ar who emphasized the importance of collaborations among all the international organizations and governments in order to help food security.
The Minister of Agricultural Jihad, Mr. Hojjati and his deputies, a number of the UN heads of agencies, foreign diplomats based in Tehran, academia and NGOs were also present at this proceeding.
The message of the Director General of the FAO, Mr. José Graziano da Silva was also read at the ceremony. Please click hereto watch this video message.