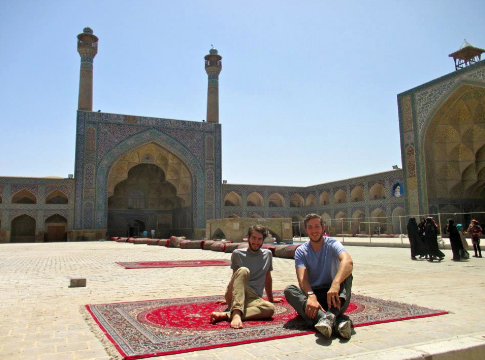 In June of 2014 Troy and Cyrus Homesley, two Iranian-American brothers from North Carolina, embarked on a journey to Iran. Growing up in Mooresville, North Carolina with an American father and Iranian mother, the brothers feel their bi-cultural upbringing integrated the best of both American and traditional Persian culture, instilling values of tolerance and openness that helped shape their worldview.

Troy, a first year law student at the University of North Carolina, and his younger brother Cyrus, a sophomore studying physics and mathematics at North Carolina State University, decided to document their journey with a video camera. The rich landscapes and vivid moments they experienced, they soon realized, needed to be captured in the fullest way. I talked to Troy and Cyrus about the 13-minute documentary they produced of their travels, 30 Days under the Persian Sun. They talked about what it was like to meet over 60 relatives for the first time in their lives, and why Iran was unlike any other destination that have ever visited.