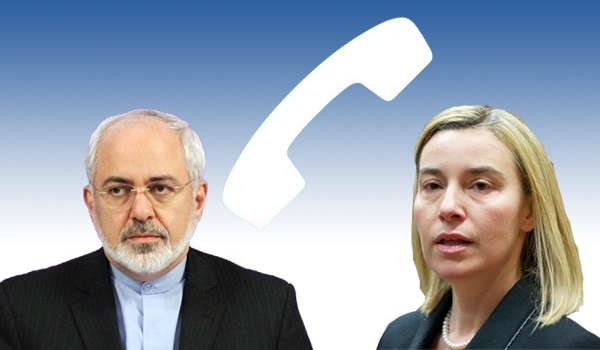 Tehran, Oct 15, IRNA – Foreign Minister Mohammad Javad Zarif, in a telephone conversation with his Italian counterpart Federica Mogherini, reviewed the latest developments regarding Iran’s ongoing nuclear negotiations with the US delegation in Vienna.

Zarif and Mogherini, who has been appointed as the next EU foreign policy chief, conferred on the latest regional and international developments in a meeting in Rome on Sept 26, 2014.

Zarif left Tehran for Vienna on Tuesday. He had a meeting with EU foreign policy chief Catherine Ashton Tuesday evening ahead of the trilateral talks with Ashton and US Secretary of State John Kerry over Iran’s nuclear program to be held on Wednesday.

Zarif, Ashton and Kerry will discuss the progress of the ongoing nuclear negotiations between Tehran and G5+1 later today. The negotiations may extend till Thursday.

Tehran and the G5+1 – Russia, China, France, Britain, the US and Germany – wrapped up their latest round of nuclear discussions in New York late September.

Iran and its negotiating partners are currently working to reach a final agreement aimed at ending the longstanding dispute over Tehran’s civilian nuclear activities as the November 24 deadline approaches.

Last November, the two sides clinched an interim nuclear accord, which took effect on January 20 and expired six months later. However, they agreed to extend their talks until November 24, as they remained split on a number of key issues.