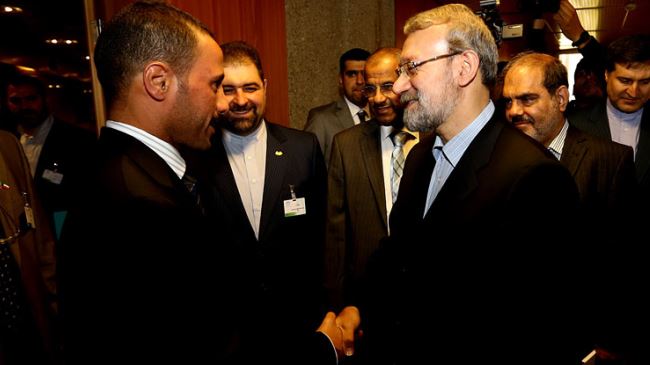 Iran’s Majlis Speaker Ali Larijani has warned against increasing terrorism in the Middle East, saying acts of terror by the ISIL militants are the outcome of misdeeds by the West and certain regional countries.

“Regional issues are very complicated, though some issues have been made clear. Therefore, what is going on in the region and terrorist acts by the ISIL in Syria and Iraq are the outcome of measures taken by big Western countries and some regional states as a result of miscalculation,” Larijani said in a meeting with Kuwaiti parliament speaker, Marzouq al-Ghanim, in Geneva on Tuesday.

Larijani, who is in Switzerland to partake in the 131st Assembly of the Inter-Parliamentary Union (IPU), criticized Western countries for refusing to alter their approaches to regional issues and emphasized that terrorism cannot be dealt with simply.

The Kuwaiti parliament speaker, for his part, said terrorist groups pose a threat to all regional countries.

He added that certain countries seek to cause rift among Shia and Sunni Muslims, calling on all regional states to remain vigilant and boost cooperation to thwart such plots.

The ISIL terrorists, who currently control parts of Syria and Iraq, have committed widespread acts of violence, including mass executions, abductions, torture and forcing women into slavery in the areas they have seized in the two countries.

They have threatened all communities, including Shias, Sunnis, Kurds, Christians and Izadi Kurds, as they continue their atrocities in the two neighboring Arab states.