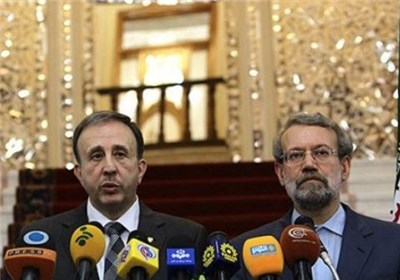 TEHRAN (Tasnim) – Parliament speakers of Iran and Syria in a meeting in Geneva discussed a range of regional and international issues, particularly the prolonged crisis in Syria.

Iranian Parliament Speaker Ali Larijani and his Syrian counterpart Mohammad Jihad al-Laham met in the Swiss city on Monday on the sidelines of the 131st Inter-Parliamentary Union (IPU) Assembly.

The gathering covered the most recent developments in the region and the world, specifically the ongoing conditions in crisis-torn Syria.

The both speakers emphasized the necessity for the fight against terrorism, which poses a serious threat to the world at the present time.

Also at the meeting, they explored avenues for the expansion of parliamentary ties between Iran and Syria.

Over 700 lawmakers from 141 countries, including 104 speakers and deputy speakers of parliament, attend the 131st IPU Assembly from October 12 to 16.

The Geneva-based Inter-Parliamentary Union, which is an important non-governmental parliamentary institution, was founded in 1889.