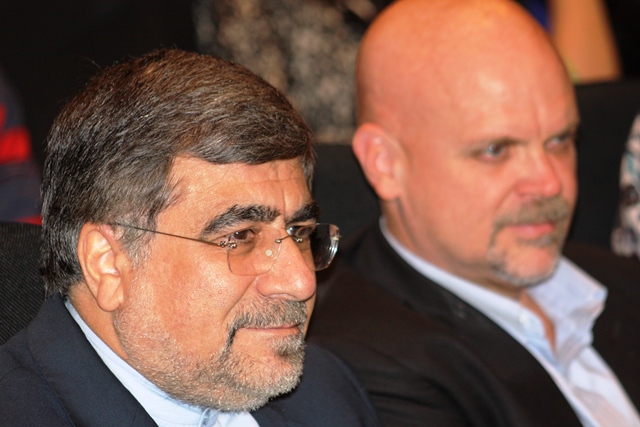 ‘Educate children with a culture of peace’ – UN Resident Coordinator in I.R. Iran

TEHRAN, 7 October 2014— ‘To prevent violence, we must develop a culture of peace in the minds of our children.’ This was how Mr. Gary Lewis, the UN Resident Coordinator in the Islamic Republic of Iran opened his remarks at the private screening of the globally award-winning Iranian movie, ‘Rooster Trademark Paper’.

Directed by Ms. Maryam Milani, the movie was shown as part of the National Children’s Day celebrations, observed on 8 October in Iran. The Minister of Culture and Islamic Guidance, Dr. Ali Jannati, members of the UN family based in Iran, high-ranking officials, private sector and artists were present in this ceremony.

In his opening statements, Minister Jannati recalled the adverse situations under which many children nowadays live. He urged all of the role-players and officials across the world to feel responsible and accountable toward children, particularly those who are deprived from basic education and facilities due to conflicts and poverty.  He praised ‘Rooster Trademark Paper’ for its content and expressed delight that the benefits from screening this movie would be charitably directed to the orphans and children suffering from health problems at a medical center in Tehran.

The UN Resident Coordinator, Mr. Gary Lewis was the next keynote speaker at the ceremony.  Emphasizing the significance of preventing violence through developing a culture of peace in the minds of children, Mr. Lewis continued, ‘It is our responsibility to teach our children, as the leaders of tomorrow to solve problems peacefully, open dialogue and understand different cultures.’ Referring to this year’s theme of the Children’s Day, ‘Hello: I am a child’, he added that educating the children with a culture of peace actually ‘starts at the kitchen table, when we teach our children tolerance – respect – understanding – and love.’ In the end, he underscored the importance of the artists’ role in championing such noble notions as peace, and congratulated Ms. Milani and her team for their contributions in this important cause. Click here to read the full speech of Mr. Lewis.

The National Children’s Day is celebrated on 8 October in Iran. This year, the Government of the Islamic Republic of Iran, has decided to hold a full week of celebrations – from 6 to 12 October – naming each day of the week after one of the children’s rights – as mentioned in the Convention of the Rights of the Child. The movie ‘Rooster Trademark Paper’ has been nominated in more than 50 film festivals across the world including the Toronto International Film Festival (TIFF), and received Liv Ullman Peace Prize in 2012. Click here for a short trailer of the movie.