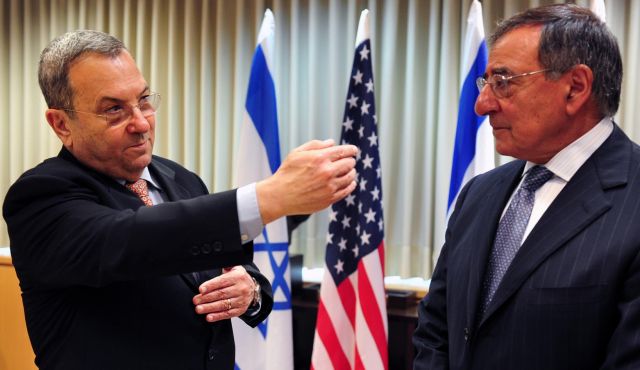 The memoirs now being published by key members of the Obama administration from the president’s first term are gradually painting a fuller picture of the great drama that roiled the White House, largely out of the public eye, between 2009 and 2012: Israel’s threat to attack Iranian nuclear facilities and Washington’s efforts to persuade Jerusalem to hold off in exchange for tightening the international sanctions on Tehran.

Panetta’s “Worthy Fights: A Memoir of Leadership in War and Peace,” which was released October 7, is devoted in large part to America’s relationship with Israel in general and the Iran affair in particular. Clinton’s “Hard Choices” was published in June, but received little attention at the time in Israel because it was followed soon on by the abduction of the three teenagers in Gush Etzion.

Clinton’s most interesting disclosure in connection to Israel had to do with the Washington-Tehran back channel, established with the encouragement of the sultan of Oman. These contacts eventually led to last November’s interim nuclear agreement between Iran and the world powers.

According to Clinton’s book, the sub rosa talks reached their peak in July 2012, when she and two of her aides came to Oman, each one separately, for talks. The timing of these visits is interesting, coinciding as they did with a combined attack of threats to bomb Iran conducted by Prime Minister Benjamin Netanyahu and then-Defense Minister Ehud Barak. It was at the height of the U.S. election campaign that culminated in November with the reelection of President Barack Obama. The international media speculated breathlessly about the possibility of Israel attacking Iran without Obama’s approval.

In early August 2012, Haaretz Magazine published what came to be known as Ari Shavit’s interview with “the decision maker” (generally assume to be Barak himself) that was interpreted as an explicit Israeli threat to strike Iranian nuclear facilities. The concurrence of these events raises two questions: What did Israeli intelligence know about the meetings in Oman while they were taking place, and was there a connection between Barak’s threats and the covert thawing of relations between Tehran and Washington.

The defense minister made an impressive U-turn and left the prime minister alone on the front lines. The option of a unilateral attack was taken off the agenda and a short time later Barak himself left politics.

Panetta, in his memoir, tells how he regretted the leak to David Ignatius of the Washington Post. In February 2012, while on a trip to Europe, Panetta told Ignatius he feared Israel was set to attack Iran some time in the next four months. As could have been expected, the resulting story created international headlines and infuriated the White House. Panetta describes his warm relations with Israel, and especially his relationship with Barak, via the normal rosy filter common to American politicians: the memory of the Holocaust, the nuclear menace and the technological miracle in the desert. With this in mind, one can see how the secretary of defense, like the president, could have taken Israel’s threats to attack Iran very seriously.

During interviews in the American media last week to promote the book, Panetta said he expected Iran to present uncompromising positions in the talks with the six powers over a permanent agreement on its nuclear program, which are scheduled to resume this week in Vienna.

November could turn out to be particularly interesting, with the coincidence of the deadline for reaching a deal on Tehran’s nuclear program and the U.S. midterm elections. The Democrats fear that the Republicans, in addition to retaining their control of the House of Representatives, will gain a majority in the Senate. Such an embarrassing defeat for Obama would further weaken his presidency at home and abroad.

This election forecast might even have something to do with Netanyahu’s return, during his recent visit to Washington, to his aggressive tone toward Obama. It is clear that Netanyahu and the Obama administration are once again on a collision course, this time over the conflict with the Palestinians, but the split over how to address the Iranian threat could all too quickly be tacked onto the list of grievances.

Israel has a few worries that are closer to home as well. Last Tuesday two Israeli military sappers were injured slightly by the explosion of two improvised explosive devices detonated remotely by Hezbollah near Mount Dov on the Golan Heights. Uncharacteristically, Hezbollah claimed responsibility for the incident immediately, saying it was payback after one of its own sappers was killed while trying to dismantle an Israeli spying device in Southern Lebanon on September 5.

We reported here on the change in Hezbollah’s approach, as Israel Defense Forces Military Intelligence understands it, back in April. The idea was that the organization introduced a policy of retaliating in some fashion for every Israeli “act of aggression” in Lebanese territory.

Even after the latest incidents, however, the accepted wisdom in Israel is that Hezbollah has no interest in anything more than a limited, localized response. It’s too busy aiding the Assad regime in Syria’s civil war and serving as military advisor to Iraqi Shi’ites to go looking for a confrontation with Israel.

But according to reports from Mount Dov, IEDs were placed in two separate areas. The incidents had the potential to kill six or seven IDF soldiers, which would have dragged Israel into at least one day of combat with Hezbollah on the border. Is it possible that Hezbollah’s self-confidence exceeds the estimates of MI? Reading the enemy’s intentions may be the most difficult aspect of intelligence work. It is hard to forget that in the recent operation in the Gaza Strip, too, Israel did not always suss out the intentions of Hamas.