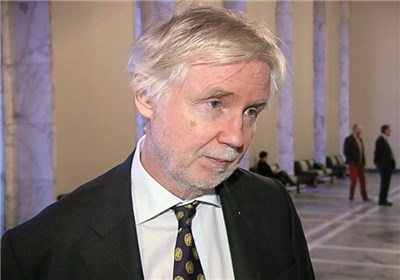 TEHRAN (FNA)- Finnish Foreign Minister Erkki Tuomioja in a meeting with outgoing Iranian Ambassador to Helsinki Seyed Rassoul Moussavi expressed the hope that a new atmosphere would be created in the relations between Tehran and the European states by a good ending to Iran-powers nuclear talks.

He also recalled his good memories of a recent visit to Iran, specially his visit to the Southern city of Shiraz.

During his early September visit to Shiraz, Tuomioja underscored Iran’s remarkable progress in various fields of science, particularly in stem cells technology, and called for the promotion of scientific relations between the two countries’ universities and academic centers.

Tuomioja, who paid a visit to Shiraz University of Medical Sciences and the Oncology Laboratory, underscored Iran’s eye-catching progress in stem cells.

“Iran and Finland can promote their relations extensively in the field of culture and education,” he said.

Also in a joint press conference with his Iranian counterpart Mohammad Javad Zarif in Tehran last month, Tuomioja underlined the need for the further expansion of relations between Iran and the European Union (EU).

“Normalization of relations can bring about positive changes,” Tuomioja said.

Asked about the prospects of Tehran-Helsinki relations, the Finnish foreign minister said, “In Helsinki, there is a strong interest in the expansion of ties with Iran and we are looking for the removal of restrictions in the relations by reaching a nuclear agreement.”

He expressed pleasure in his presence in Iran, and said since he first visited Iran in 2003 “we have faced no problem in our bilateral relations”.

The Finnish foreign minister pointed to the current talks between Iran and the Group 5+1, and said, “I hope that the remaining issues will be resolved in the coming months.”

He noted that a final agreement between Iran and the G5+1 would result in the expansion of Tehran-Helsinki ties in political, economic and cultural areas.