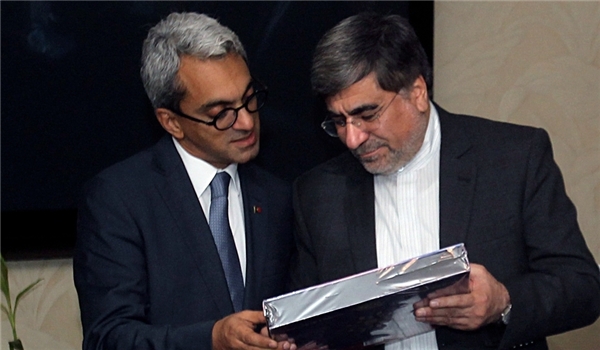 TEHRAN (FNA)- High-ranking Iranian and Portuguese officials in a meeting in Tehran emphasized the need for the further development of cultural ties between the two countries.

Iranian Culture Minister Ali Jannati in a meeting with Portuguese Secretary of State for Culture Jorge Barreto Xavier underlined that Tehran and Lisbon are determined to boost their cultural cooperation.

He also called for mutual cooperation between the two countries in cultural, artistic and audio-visual media arenas.

Xavier, for his part, called for the expansion of all-out cooperation between the two countries, and said exchanging university students and professors and translating books into Persian and Portuguese languages will be a good start for the development of mutual cultural relations.

In June, Iran and Portugal signed two memoranda of understanding (MoU) in cultural areas in a bid to open a new chapter in their bilateral ties.

Speaking in a meeting with Head of Iran’s Chamber of Commerce Gholam Hossein Shafeyee in Tehran, the Portuguese envoy underlined the importance of exchanging delegations between the two nations, and called for future visits and meetings between private sectors.

“Exchange of information to choose an appropriate time such as the National Day or Portugal’s Economy Day for the delegation’s trip to Iran, should be considered” he added.

“Iran and Portugal can collaborate in various fields, including energy, agriculture, oil and gas,” the envoy pointed out.