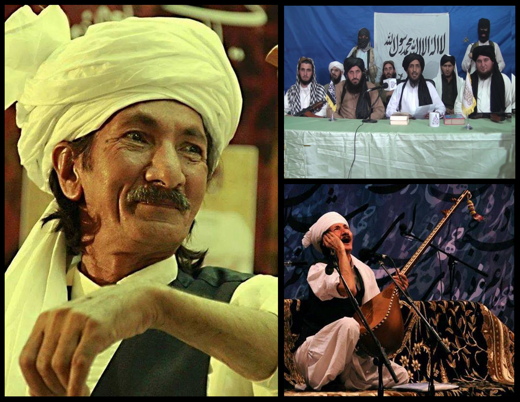 A thick line between “love” and “hate”

An ocean in between two figures who share a name, one famed and the other infamous.

Recent days have seen the simultaneity of two events: the expression by an extremist group – with links to Al-Qaeda – of support for and allegiance with Aba Yazid Qaher al-Khorasani aka “Omar Khalid Khorasani, and the passing of Gholamali Pourataei Khorasani, an Iranian folkloric musician from Khorasan. This concurrence naturally evokes one single name in the minds of people: Khorasani.

There is no denying the fact that a dividing line lies between the Khorasani who has intentions to kill people only to prevent them from practicing what he calls heresy, and the other whose love-based melodies were euphonious and whose instrument was exhilarating and life-affirming, and it also reveals a widening gap between “love” and “hate”.

Khorasan newspaper in its October 6 issue ran a report on the passing of Master Gholamali Pourataei’s whose memory lives on for good, as it was the case with his countrymen, among them big names such as Mowlana, Saadi, Ferdowsi, Khayyam, etc., who are alive in the hearts and minds of people several centuries after their demise.

The good-sounding melody of one heals the wounds and the malady of the other leaves scars on the bodies and souls of people. Standing in between are Khorasan and poor Khorasanis.

Pourataei, the veteran Mugham singer and Dotar player, passed away on Saturday October 4 [at the age of 73] after a long battle with cancer.

On Monday in a ceremony to commemorate the late Pourataei at Imam-Reza Cultural Complex in Mashhad, northeastern Iran, a message by Ali Moradkhani, the deputy culture minister for artistic affairs, was read out.

In the message Moradkhani said, “The sound of Pourataei’s Dotar has travelled beyond Iran’s national borders and has echoed around the world. It was in fact the messenger of Iran’s music in the whole world.”

An official with the Music Society in Khorasan Razavi province also said in the ceremony that today part of this land’s culture was carried in a funeral procession, adding that Pourataei embodied the voice of desert in Khorasan. He also said people across Iran are among the bereaved family of the late singer.

Then a student of the late Pourataei took the podium and said, “He was the first one who sang Ferdowsi’s Shahnameh by Dotar saying that he always shouted loud and clear [the name of] Iran with his instrument.”

Later, the body of Pourataei was transferred to his hometown, Torbat-e Jam, to be laid to rest in an all-artist cemetery.