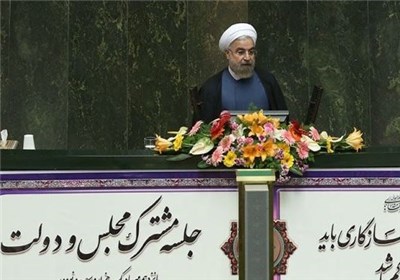 TEHRAN (Tasnim) – Iranian President Hassan Rouhani attached great significance to stability in the region, pledging that the Islamic Republic will continue its support for the regional countries in their fight against terrorism.

“Fortunately, Iran is the region’s stable country and has always provided support for the regional countries, especially Iraq, Syria, Lebanon and Afghanistan, and God willing, we will continue to support them in a bid to make the region stable,” Rouhani said, addressing a gathering of cabinet members and lawmakers at the Iranian parliament on Tuesday evening.

“All countries have said that Iran should play its role in fighting against terrorism and there is no doubt about this,” the Iranian president noted.

Iranian officials have on many occasions underlined the necessity for comprehensive move against terrorist groups in the region.

Earlier in a telephone conversation with Qatari Emir Sheikh Tamim bin Hamad Al Thani on Saturday, Rouhani had voiced deep concern over the spread of extremism in the region and the world and called on regional countries to fight terrorist groups through joint efforts.

“All of us should make continuous efforts to prevent bloodshed among Muslims, particularly during the blessed days and the Sacred Islamic Months ( of Rajab, Dhu’l-Qa’dah, Dhu’l-Hijjah and Muharram),” Rouhani said.

“The region is going through a difficult stage,” he noted at the time, adding that all regional countries should get past this phase by planning and making efforts to restore peace and security to the region.

Rouhani also underlined that fighting terrorism should not undermine the national sovereignty of other countries, saying that any military action against any country without coordination with the government of that nation will increase instability.