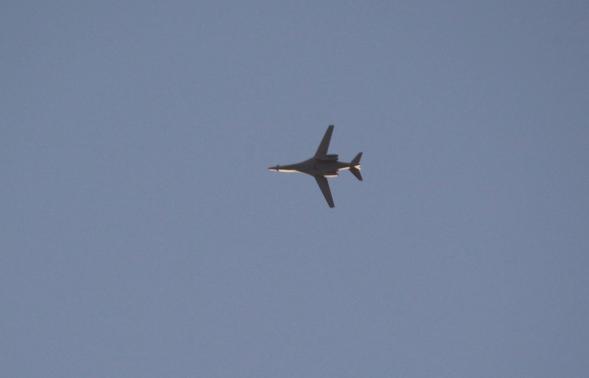 . A jet from the U.S.-led coalition flies in the sky over the Syrian town of Kobani as seen from a hill in Tal-Hajeb village that overlooks Kobani, October 7, 2014.
CREDIT: REUTERS/STRINGER

(Reuters) – U.S.-led air strikes on Wednesday pushed Islamic State fighters back to the edges of the Syrian Kurdish border town of Kobani, which they had appeared set to seize after a three-week assault, Kurdish officials in the town said.

The town has become the focus of international attention since the Islamists’ advance drove 180,000 of the area’s mostly Kurdish inhabitants to flee into adjoining Turkey, which has infuriated its own restive Kurdish minority by refusing to intervene.

Islamic State hoisted its black flag on the eastern edge of the town on Monday but, since then, air strikes by a U.S.-led coalition that includes Gulf states opposed to Islamic State have redoubled.

“They are now outside the entrances of the city of Kobani. The shelling and bombardment was very effective and as a result of it, IS have been pushed from many positions,” Idris Nassan, deputy foreign minister of Kobani district, told Reuters by phone.

“This is their biggest retreat since their entry into the city and we can consider this as the beginning of the countdown of their retreat from the area.”

Islamic State had been advancing on the strategically important town from three sides and pounding it with artillery despite fierce resistance from heavily outgunned Kurdish forces. Defense experts said it was unlikely that the advance could be halted by air power alone.