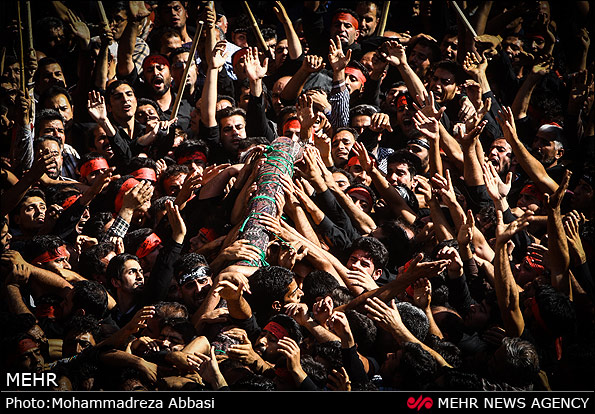 The mayor of Kashan invited Ms. Esther Kuisch Laroche, Director and Representative of UNESCO’s cluster office in Tehran, to attend the seminar on “Intangible Cultural Heritage and Religious Tourism in Kashan”, which took place on 2 October and to take part in the annual Qālišuyān rituals (also referred to as “carpet washing ceremony”) in Mašhad-e Ardehāl the next day.

The Qālišuyān rituals of Mašhad-e Ardehāl were inscribed on UNESCO’s Representative List of the Intangible Cultural Heritage of Humanity in 2012.
The origin of the ceremony can be traced back to the time when Sultan Ali (son of the fifth Imam Muhammad al-Baqir) was killed in the village by his enemies. After his followers from the area arrived too late to save him, they wrapped his body in a carpet. They then washed his body in a stream 150 meters away, before burying him.
For hundreds of years, the people from the surrounding area have flocked to Mashhad-e Ardehal to mourn and represent this event each year. Unlike the majority of Iranian rituals that follow a rotating lunar calendar, Qālišuyān is attended according to a fixed solar-agricultural calendar, requiring it around the nearest Friday to the 17th day of the month of Mehr (October 8th), called Jom’e-ye Qāli (“carpet Friday”).
On Jom’e-ye Qāli morning, the people of Xāve gather at Soltān Ali to sprinkle rose-flower on a donated carpet they select. Having done the wrapping rituals, they then deliver it to the people of Fin outside. Holding neatly cut and beautifully decorated wooden sticks, the people of Fin run to take the lead in getting a grasp of the carpet, and carrying it to a nearby stream. A corner of the carpet is rinsed; the rest is covered with drops sprinkled with the sticks. The carpet is, then, returned to the mausoleum and delivered to the servants inside.
The people of Kāšān bring a prayer-carpet to commemorate their old duty of carrying Soltān Ali’s prayer-carpet, as stated in the oral history. And the people of Našalg join the rituals on the next Friday, Jom’e-ye Našalgihā (“Našalg people’s Friday”).
The rituals are to express love and loyalty toward Soltān Ali, who is claimed to have been martyred in the same place.
The Qālišuyān rituals of Mašhad-e Ardehāl were inscribed on UNESCO’s Representative List of the Intangible Cultural Heritage of Humanity because they provide an important sense of identity to the people of Mašhad-e Ardehāl and neighbouring communities, each of which has specific roles during their performance, transmitted from generation to generation.
Elders, tribal chiefs, and familial nobles constitute the most reliable sources of information on Qālišuyān. Their knowledge is transmitted orally to youngsters, who are allowed to take part only when they are competent and respectful. The people of Fin, Xāve, Našalg, and Kāšān consider constant oral transmission of the main principles, as well as the details of the ritualistic procedure, as un-separable from the training programs they follow for their children.
Intangible cultural heritage is an important factor in maintaining cultural diversity in the face of growing globalization. An understanding of the intangible cultural heritage of different communities helps with intercultural dialogue, and encourages mutual respect for other ways of life. The importance of intangible cultural heritage is not just the cultural manifestation itself but rather the wealth of knowledge and skills that is transmitted through it from one generation to the next.
On the occasion of this year’s carpet washing ceremony, the UNESCO Representative and Iranian Vice-President and Head of Cultural Heritage, Handicrafts and Tourism Organization (ICHHTO) Mr. Massoud Soltanifar, unveiled the UNESCO certificate of inscription on the Representative List of the Intangible Cultural Heritage of Humanity in front of the crowd of pilgrims gathered at the Imamzadeh Sultan Ali shrine.
After the ceremony, Ms. Esther Kuisch Laroche also visited the cultural heritage sites in and around Kashan.