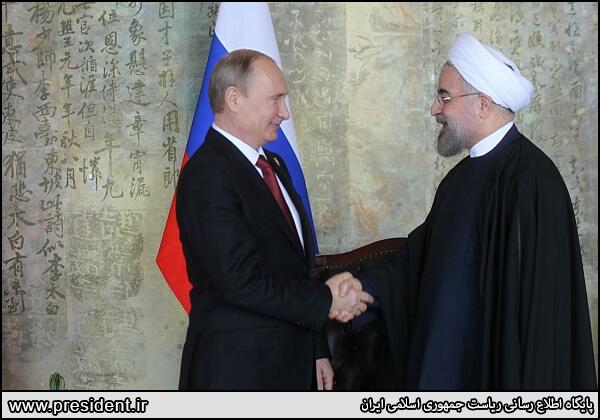 Putin: We will defend Syria’s Assad from the American plots regardless of all possible costs

“American government is pursuing a double-track policy for many years and this will bring deleterious consequences not only in the restive Middle-East region but also will have global effects” RT quoted the Russian president as saying on Sunday.

Vladimir Putin criticized American administration over supporting Islamic fundamentalism and added that America will be the first victim of current wrong policies adopted by President Obama.

During a meeting with his Iranian counterpart, Kremlin’s strongman underlined the urgent need for intentional consensus to tackle the imminent threat of terrorist organizations such as ISIS and al-Nusra Front.

“We have a naval fleet in Syrian port of Tartus and we shall defend our vital interests in that region even if we would encounter hostilities from American oil-rich Arab puppet regimes” said the Russian president, alluding to Saudi Arabia and Qatar which are inciting Syria’s civil war.
During the course of his meeting with the Iranian president, Hassan Rouhani, the Russian president pointed out to US-Saudi relations and questioned American government’s honesty in its alleged war against terrorism and referred to secret ties between Saudis and hardline groups such as ISIS.

Unlike Washington which is only looking for its short-sighted goals in igniting devastating wars in the Middle-East, Russia has basic policy of assisting Syrian government to fight terrorism but this support should only be offered through the legitimate canals, added the Russian president.