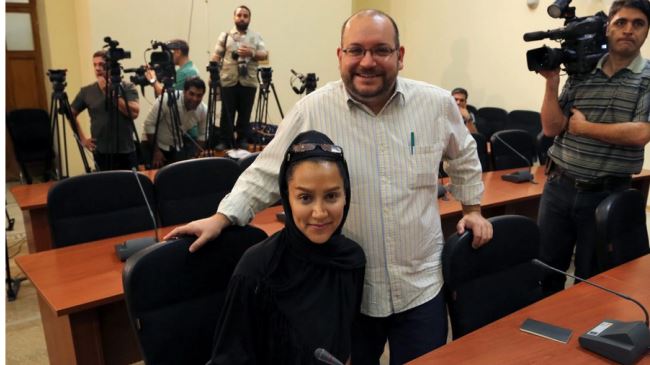 Iran frees wife of Post’s Tehran correspondent, but he remains in custody

An Iranian photojournalist detained in Tehran nearly two months ago along with her husband, The Washington Post’s Tehran correspondent, has been released on bail.

Yeganeh Salehi was bailed out last week while her husband, Jason Rezaian, remains behind bars, his brother Ali was quoted by The Post as saying on Monday.

“We are thankful Yeganeh has been released on bail,” said a statement by her family. “We pray that the Iranian government will conclude that Jason should be released as well.”

The Iranian officials have not yet commented on this report.

On July 24, the Washington Post quoted US officials as saying that Rezaian, a 38-year-old dual Iran-US citizen, and his Iranian wife Salehi were arrested on July 22 in Tehran.

According to The Post, two other American citizens also detained with them work as freelance photojournalists.

Rezaian has been The Post’s correspondent in Tehran since 2012, and his wife, an Iranian citizen, works as a correspondent for the National, a newspaper based in the United Arab Emirates.

On July 25, Director General of the Judiciary’s Tehran Province Office Gholam Hossein Esmaeili confirmed Rezaian’s arrest, saying that “Probe into the case is still in the preliminary stage, and information on that can be made public [only] after technical investigations and interrogation.”

He said that the Iranian security forces will not allow the enemy and its lackeys to throw their weight around in the country.