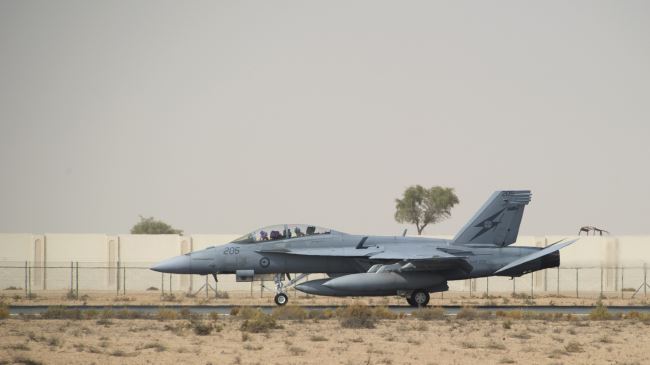 The Royal Australian Air Force has conducted its first mission in Iraq against the ISIL cult but has not carried out any airstrikes.

The military said on Monday that Australian fighter jets had flown their first armed combat mission in Iraq against the terrorists without actually attacking them.

“The Super Hornet aircraft conducted an air interdiction and close air support mission over northern Iraq overnight,” the Australian Defense Force said in a statement, adding, “The Super Hornets were on-call to attack targets as identified…. On this occasion, the aircraft did not use their munitions and have returned to base to disarm and prepare for future sorties.”

Australia is part of the so-called international coalition conducting an air campaign against the ISIL that the United States has been building since first launching airstrikes in August.

“Also, subject to final legal documentation, cabinet has authorized the deployment of Australian special forces into Iraq to advise and assist Iraqi forces,” he added.

The ISIL terrorists currently control parts of Syria and Iraq. They have carried out heinous crimes, including mass executions and beheadings of the people, in the two countries.