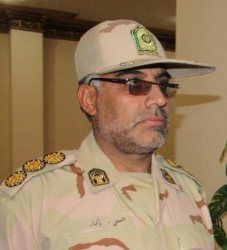 No loophole on Iran borders for ISIL militants: Commander

Ilam, Oct 4, IRNA – Commander of Ilam’s Border Guards Lotfali Pakbaz said in a press conference on Saturday that there is no loophole on Iranian borders for ISIL (Islamic State of Iraq and the Levant) militants.

Iran’s borders with Iraq are under full control and the Takfiri terrorists and extremist groups fighting in Iraq cannot infiltrate into the Iranian territory, said the commander.

Full security has been established in the border areas between Iran and Iraq and violence cannot spill over into Iran, he reiterated.

Iranian Armed Forces and intelligence personnel are fully prepared to counter threats from the terrorist groups, the commander underscored.

On June 10, Iraq’s northern Nineveh Province fell into the hands of ISIL militants. The Takfiris (extremist terrorists’) attacks have reportedly forced more than half a million people in and around Mosul, the capital of Nineveh Province, to flee their homes.

Takfiri militants have vowed to march toward the capital, Baghdad.

They have reportedly entered Iraq from neighboring Syria and Saudi Arabia to undermine security in the country.