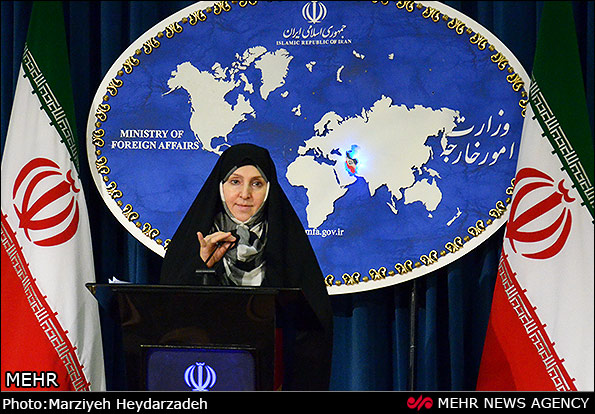 “Such issues have not been discussed in the meetings and talks between the Iranian foreign minister and the Arab League chief thus far, and release of such points is surprising,” Foreign Ministry Spokeswoman Marziyeh Afkham said on Friday.

She underlined Iran’s principled policies on the regional issues, and said, “The Islamic Republic of Iran has always opposed interference in other countries’ internal affairs and is committed to this principle and believes that the regional problems should be settled through cooperation and talks, and the repetition of unreal claims and projection of the blame on others are of no help to the settlement of the problems.”

Afkham stressed that stability, security, growth and development can be established in the region merely through constructive cooperation and interaction and preventing the meddling of the trans-regional states.

Some Arab media claimed that al-Arabi in a meeting with Zarif had criticized Iran’s regional policies.

The claims were raised after earlier reports said that Zarif in a meeting with El-Arabi on the sidelines of the UN General Assembly meeting in New York late September had voiced concern over the ongoing bloodshed carried out by extremist groups in the region, and called on Muslim nations to grow more united against terrorism and extremism.

According to the report, the two officials reviewed the latest developments in the Middle-East, the terrorist and extremist movements, and the issue of the international anti-ISIL Paris Conference.

“Everyone’s assistance is needed to resolve the prevailing problems as the present day conditions call for dialogue, cooperation and accepting responsibility,” said Zarif.

He announced Iran’s will for cooperation and holding dialogue with the regional countries aimed at uprooting the present day threats.

“Unfortunately, the terrorists’ activities against the Muslim nations are conducted in the name of Islam, which is why we all need to try to refrain from the continuation of this vastly expanding threat,” El-Arabi said for his part.