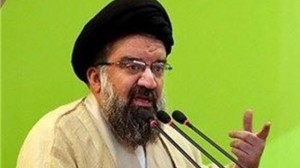 Addressing Friday prayers congregation here, the cleric supported the Iranian nuclear team noting, “There is no new word regarding the nuclear talks. We repeat our previous position and support the negotiations which took place within the frameworks and redlines devised by the Leader.”

He referred to Tehran’s redlines as, first, maintaining enrichment capacity to meet the country’s needs and second, to continue research works in the field of nuclear activities.

Addressing the worshippers in his second sermon at Tehran University campus, the cleric

“Like the Natanz site, the site of Fordo should maintain its enrichment capacity,” Khatami strressed adding that the “nature of Arak heavy water should remain unchanged.”

The outcome of the nuclear negotiations should be the removal of all sanctions simultaneously, the senior cleric added.

Noting that Islamic dignity should be maintained during the talks, the Friday prayer interim leader said any agreement associated with Iranians humiliation will be regarded disgraceful and unacceptable by the people.

Elsewhere in his address, Khatami referred to the remarks made by British Prime Minister David Cameroon last week as “sheer lies.”

“The British prime minister was lying as he accused Iran of supporting terrorism,”Khatami said.

He said the “cheap” remarks of the British prime minister should not overshadow the useful and valuable address made by President Hassan Rouhani to the 69th annual session of the UN General Assembly.