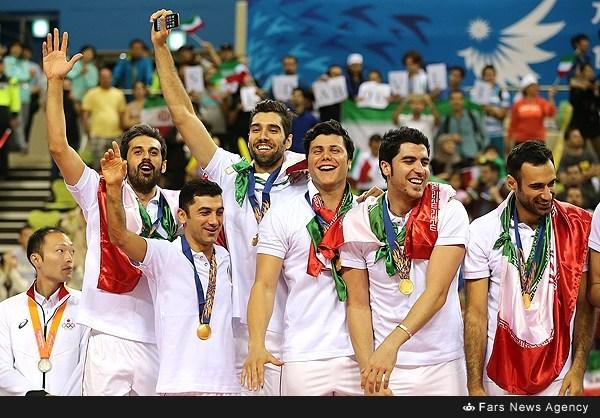 Iran beat Japan 3-1 in the final showdown of the Asia Cup and became Asia’s volleyball champion for the first time.

Iran defeated Kuwait 3-0 on Wednesday to advance to semi-finals of volleyball competitions in the 17th Asian Games in Incheon.

This was Iran’s sixth straight win in the competitions with only one set losing to South Korea.

The Islamic Republic of Iran climbed two positions in the new edition of the FIVB rankings to land in the 10th spot in the world.

According to the latest ranking released on September 24, 2014, the Iranian team collected 134 points, and stood at the first spot among Asian teams.

After brilliant performances in the 2014 FIVB World League and the 2014 FIVB Volleyball Men’s World Championship, the Asian champions stood among volleyball powerhouses like Brazil, Russia, Poland, Italy, the US and Serbia.

The three-time defending champions Brazil remain the top-ranked volleyball team with 335 points after they won the silver medal in the FIVB Volleyball Men’s World Championship, and are followed by Russia with 330 points, despite a disappointing fifth-place finish with Poland occupying the final podium spot after their excellent performance in front of their home fans at the Men’s World Championship with 275 points.

The Asian champions had a good start this year, and for the first time in the nation’s history secured a spot in the third round of the FIVB Volleyball World Championship to stand among volleyball powerhouses, and finally ended in sixth place.