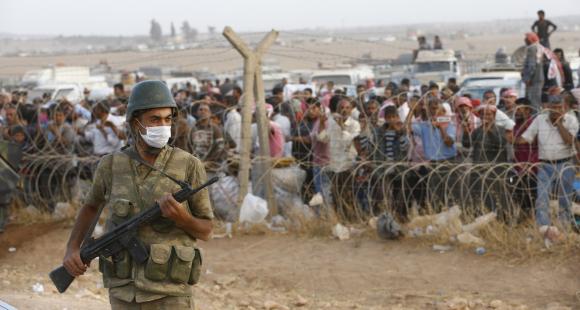 A Turkish soldier stands guard as Syrian Kurdish refugees wait behind the border fences to cross into Turkey near the southeastern town of Suruc in Sanliurfa province September 27, 2014.
CREDIT: REUTERS/MURAD SEZER

(Reuters) – Turkey signaled it may send troops into Syria or Iraq and let allies use Turkish bases to fight Islamic State, as coalition jets launched air strikes on Wednesday on insurgents besieging a town on its southern border with Syria.

The government sent a proposal to parliament late on Tuesday which would broaden existing powers and allow Ankara to order military action to “defeat attacks directed towards our country from all terrorist groups in Iraq and Syria”.

The proposal would also mean Turkey, until now reluctant to take a frontline role against Islamic State, could allow foreign forces to use its territory for cross-border incursions.

The Islamic State advance to within sight of the Turkish army on the border has piled pressure on the NATO member to play a greater role in the U.S.-led military coalition carrying out air strikes against the insurgents in Syria and Iraq.

The militants are encroaching on the tomb of Suleyman Shah, grandfather of the Ottoman Empire’s founder, which lies in northern Syria but which Ankara considers sovereign territory and has made clear it will defend.

A column of black smoke rose from the southeastern side of Kobani, a predominantly Kurdish border town under siege by Islamic State for more than two weeks, as jets roared overhead, a Reuters correspondent on the Turkish side said.

“(They) hit a village that is four to five kilometers (two to three miles) southeast of Kobani and we heard they destroyed one (Islamic State) tank,” Parwer Mohammed Ali, a translator with the Kurdish PYD group, told Reuters by telephone from Kobani, known as Ain al-Arab in Arabic.

The United States has been carrying out strikes in Iraq against the militant group since July and in Syria since last week with the help of Arab allies. Britain and France have also struck Islamic State targets in Iraq.

Using mostly nighttime strikes, it aims to damage and destroy the bases and forces of the al Qaeda offshoot which has captured large areas of both countries. Turkey, which hosts a U.S. air base at its southern town of Incirlik, has so far not been militarily involved.

Britain said on Wednesday that it had conducted air strikes overnight on Islamic State fighters west of Baghdad, attacking an armed pick-up truck and a transport.

The insurgents have taken control of 325 of 354 villages around Kobani, according to the Syrian Observatory for Human Rights, which monitors the war. Kurds who have fled to Turkey have described beheadings and the killing of children as the insurgents went from village to village.

“They’re killing us on the Turkish border, that makes us very angry. There’s no humanity from Turkey, no humanity from Europe or anywhere else in the world,” said Maslum Bergadan, who fled to Turkey and said two of his brothers had been captured by Islamic State fighters.

Turkey shares a 1,200 km (750-mile) border with Iraq and Syria and is already struggling with 1.5 million refugees from the Syrian war alone. It deployed tanks and armoured vehicles in the hills overlooking Kobani this week as fighting intensified.

But it fears that air strikes, if not accompanied by a broader strategy to end the fighting, could strengthen Syrian President Bashar al-Assad and bolster Kurdish militants allied to Kurds in Turkey who have fought for three decades for greater autonomy.

Its rhetoric has hardened since 46 Turkish hostages, whose captivity at the hands of Islamic State militants made it wary of taking action, were released this month, but it remains hesitant.

Esmat al-Sheikh, commander of the Kurdish forces defending Kobani, said there were five air strikes but that he did not yet know if they were successful. “Jets are still circling overhead,” he said by telephone.

He also reported that Islamic State had beheaded seven men and three women near Kobani in its campaign to frighten residents resisting the group’s advance.

Islamic State fighters, besieging Kobani from three sides, are now just kilometers away from the town, with the battle lines fluid, according to Idris Nassan, deputy foreign minister in a local Kurdish administration.

“Sometimes YPG pushes them back, other times ISIS progresses … the situation is still very, very dangerous,” he told Reuters by phone from the town, forecasting a long battle.

“I don’t think that ISIS can control Kobani easily”.

Islamic State has carved out swathes of eastern Syria and western Iraq in a drive to create a cross-border caliphate between the Euphrates and the Tigris rivers, terrifying communities into submission by slaughtering those who resist.

Iraqi Kurdish troops drove Islamic State fighters from a strategic border crossing with Syria on Tuesday and won the support of members of a major Sunni tribe, in one of the biggest successes since U.S. forces began bombing the Islamists.

Peshmerga fighters took control of the Rabia border crossing in a victory which could make it harder for militants to operate on both sides of the frontier.

“Of course there were attempts (by Islamic State) to return to Rabia, but they were not able to,” Peshmerga spokesman Halgurd Hikmat said.

“Now they are under great pressure from the Peshmerga in Zumar,” Hikmat said, referring to a mixed Kurdish-Arab town northwest of Mosul near an oilfield, from where Kurdish fighters had been forced to withdraw because of mines and a suicide bomb attack by Islamic State.

Control of Zumar provides access to the small Ain Zalah oil field and a nearby refinery. The insurgents have used oil sales to fund their operations.

Rabia controls the main highway linking Syria to Mosul, the biggest city in northern Iraq, which Islamic State fighters captured in June at the start of a lightning advance through Iraq’s Sunni Muslim north.

“We are in control of the (Rabia) district. There are small pockets (of militants) in the surrounding villages. The only thing left is the hospital and that will be dealt with today,” a Peshmerga fighter told Reuters by telephone.