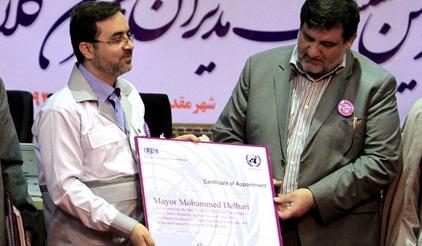 Tehran, Oct 1, IRNA – The Iranian city of Qom is providing a dynamic example of local leadership as consultations on the post-2015 international framework for disaster risk reduction identify the issue as a priority, said the UN agency leading Making Cities Resilient Campaign.

The Mayor of Qom, Mohamad Delbari, has taken a number of actions as he seeks to strengthen the resilience of his world-famous city as well as inspire other Iranian municipalities to reduce their disaster risk, the UN Office for Disaster Risk Reduction (UNISDR) reported.

It said Qom joined UNISDR’s Making Cities Resilient Campaign in February 2013 and has busily set about using the Campaign’s Ten Essentials as a reference to build a safer and more resilient city.

“The mayor established the Qom Disaster Management and Mitigation Centre under the leadership of Ali Akbar Rahimi, whose brief is to coordinate preparedness and response to natural hazards, such as an earthquake, flood, cold wave, or snow storm from the Centre’s new earthquake-resistant premises.”

Municipality staff have been trained in DRR and Urban Risk Managers have been appointed in the various City neighbourhoods. The Local Government Self-Assessment Tools (LGSAT) is also being introduced in Qom to identify gaps in disaster risk reduction approaches, according to the UNISDR.

“Seven Community Emergency Response Teams are due to be established, one of which will be located in the old urban fabrics area, where some of Qom’s most vulnerable groups, including older and poorer people, live. In addition, 12 new fire brigade stations have been established over the past year.”

“The Mayor has proven to have the ability to mobilize others to adopt disaster resilient thinking and behaviour. He has influenced policy and change at the city and regional and national level so that laws or other measures are passed to reduce disaster risk. Furthermore, he has the ability to convey messages to his citizens to reduce their vulnerability to disaster,” Bathaee said.

The UN Office for Disaster Risk Reduction (UNISDR) recently named Mayor Delbari a “Making Cities Resilient Champion”, the 12th in the world. The Vice Minister of Interior and the Head of National Disaster Management Organization of Iran, Esmaeil Najar, presented the certificate of appointment to Delbari at a recent meeting in Qom of disaster managers from Iran’s major cities of Iran.

Qom, a city of great religious significance with a population of 1.2 million people, lies 145km south of Tehran. Each year about 20 million visitors come to the city, including seminary students from 70 different countries, according to the UNISDR.