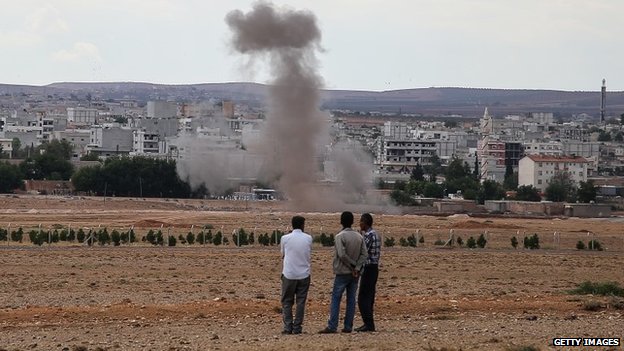 The outskirts of Kobane have been under mortar fire

US-led forces have carried out air strikes on Islamic State (IS) militants battling Kurdish fighters around the northern Syrian border town of Kobane.

A BBC correspondent saw explosions outside the town in the morning.

At least 10 people were killed overnight, Syrian activists said, as the jihadists moved to within 2 to 3km (1.2-1.9 miles) of Kobane.

Tens of thousands of people have fled across the border into Turkey since IS launched an offensive two weeks ago.

The jihadists’ advance has put pressure on the Turkish government to take a more significant role in the US-led coalition formed to combat IS.

Ministers submitted a proposal to parliament late on Tuesday to allow Turkish troops to conduct operations in Syria and Iraq, and to allow foreign forces to use Turkish military bases. 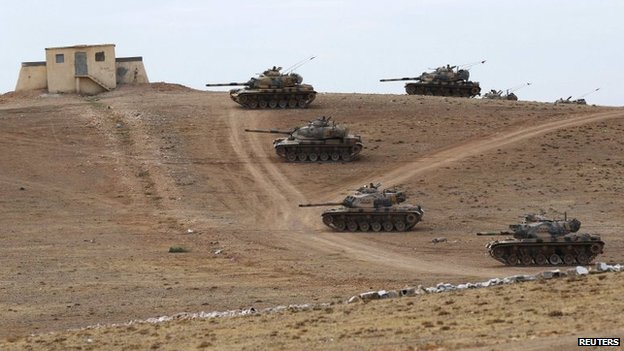 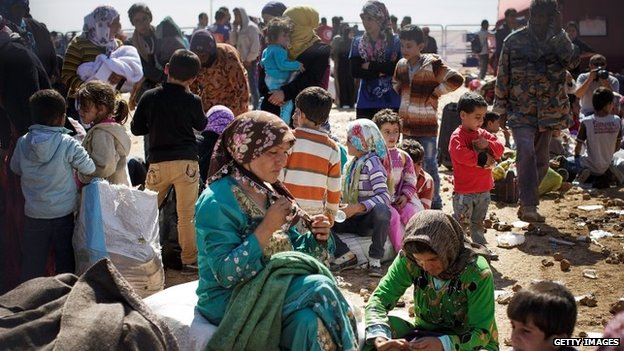 Parliament is expected to debate the proposal on Thursday, and the ruling AK Party’s majority means it is likely to be approved.

In a separate development in Syria on Wednesday, at least 17 people, including several children, were killed and dozens wounded in a double bomb attack in the central city of Homs, officials and activists said.

The blasts took place as children left a school in the Akrama al-Jadida district, which is dominated by President Bashar al-Assad’s Alawite sect.

The BBC’s Paul Adams, who is on the Turkish side of the border near Kobane, reports sporadic fighting on Wednesday. Several mortars have been fired at houses on the town’s outskirts.

There were reports of several air strikes overnight and our correspondent says he saw at least two more on positions in the distance, each one sending a huge column of black smoke high into the sky. Jets are continuing to circle overhead, he adds.

The Syrian Observatory for Human Rights, a UK-based activist group that monitors casualties from the three-year-old conflict in Syria, reported that there had been at least five air strikes south and south-east of Kobane.

It said nine Kurdish militiamen from the Popular Protection Units and an IS militant had been killed in clashes overnight.

The Syrian Observatory also reported that IS had beheaded five Kurdish fighters, including three women, as well as four Arab rebels and a Kurdish civilian who had been captured during clashes 14km (8 miles) west of Kobane on Tuesday.

Images have been posted online purportedly showing the women’s heads placed on a cement block in the town of Jarablus, which is held by IS, according to the Associated Press.

At the border fence itself, desperate civilians are huddled with their vehicles and livestock, our correspondent says.

They are clearly terrified at the advance of the militants but also angry at what they say is the refusal of the Turkish authorities to let them cross, he adds.

At the moment, the only official crossing point is several kilometres away, on the other side of Kobane, and the civilians say that minefields make it too dangerous to move.

Capturing Kobane, also known as Ayn al-Arab, would give IS unbroken control of a long stretch of the Syrian-Turkish border. The group has already seized large swathes of territory to the south in the provinces of Aleppo, Raqqa and Deir al-Zour, as well as in neighbouring Iraq.

Overnight, British warplanes fired four missiles at IS vehicles in Iraq. The Ministry of Defence said the two Tornados had fired Brimstone missiles at an armed pick-up truck and a transport vehicle west of the capital, Baghdad, adding that the strikes were “successful”.

Australian Prime Minister Tony Abbott meanwhile announced that Royal Australian Air Force jets would begin supporting the US-led coalition operations against IS in Iraq, but would not yet carry out air strikes.

What is Islamic State (IS)?

In 60 seconds: What does Islamic State want?